MLS Reconciliation and Recognition Committee are excited to bring you an update on the Classroom photo mural project. Some of you may have seen new murals installed in spaces around the Law School building. A total of 6 wallpapers can be found in various locations.

The purpose of the initiative is to acknowledge the long, complex (and important) history of lawful relations between Indigenous and Anglo-Australian laws and peoples. The Law School acknowledges that Anglo- Australian law is marked by refusal and violence, and has often been found wanting, when asked to meet with Indigenous laws. But we also want to recognise that Indigenous peoples in Australia have resisted, argued with and transformed the law we teach and learn every day in the MLS Building. This initiative introduces to the teaching spaces selected images of meetings, or encounters, between laws that have been driven by Indigenous peoples, often with Anglo-Australian lawyers working alongside or for them.   Prof. Mark McMillan commenced the wallpaper project when he was with us at MLS, and we are pleased and proud to bring it to life.  The placement of these images, accompanied by explanatory captions and longer QR accessible text that tells the story of the particular encounter, is intended to provide a constant presence to engage students, teachers and visitors in shared stories and histories; and to think about how we might take responsibility for our own law in the past, and into the future, in our studies and subsequent practice. The teaching space where the images are to be located – regardless of the topic being taught – we hope will give rise to questions around particular histories, law/s and lawful relationships to the land on which we teach and learn.

We would also note that the activity of establishing the wallpaper project has in itself involved an engagement of lawful relations. For each image, we have of course not only addressed the necessary legal permissions, but also engaged in protocols of seeking permissions from the Indigenous peoples and their descendants whose stories are told in the images.

In lecture theatre 102 a large-scale mural of the Mabo decision is installed. The image Mabo Plaintiffs and witness with their Lawyer, Supreme Court of Queensland, May 1989 depicts the plaintiffs (L to R: Father Dave Passi, Eddie Koiki Mabo, Bonita Mabo, Bryan Keon-Cohen, James Rice, Eddie Mabo Jnr & Henry Kabere.) in the case of Mabo v Queensland [No. 2] in 1989, at the Supreme Court in Brisbane with their junior counsel Bryan Keon-Cohen and some of their supporters. Mabo v Qld [No. 2] was decided by the High Court in 1992. The decision remains one of the most significant and complex cases in Australian legal history. (Image courtesy of Yarra Bank Films)

In lecture theatre 108 a large-scale mural of the Tent Embassy is installed. The image Aboriginal tent embassy officials arrive at the embassy after it had be re-erected on the lawns of Parliament House in Canberra, where over 1,000 Aborigines and their supporters demonstrated for Aboriginal land rights, 30 July 1972 shows activists Ghillar Michael Anderson and Cheryl Buchanan - members of the Tent Embassy diplomatic staff - returning to the Tent Embassy on 30 July 1972. Supporters can be seen saluting and celebrating the ambassadors’ return to the rebuilt Embassy after it was forcibly evicted and dismantled by federal police. The Tent Embassy celebrated its fortieth year in 2012; it continues to stand in front of Parliament and attest to the limitations of Australian laws and governments. Image courtesy of Fairfax Media.

In room 628 a large scale mural Pastor Doug Nicholls leads Aboriginal people from Lake Tyers to Parliament House in Melbourne, 23 May 1963 is installed. This image shows Pastor Sir Doug Nicholls alongside community leaders Laurie Moffatt, Eric Onus and Jim McGinness, as well as Victorian Opposition leader Clive Stoneham, in Melbourne in 1963. Leading a crowd of forty, Moffatt, Nicholls, Onus and McGinness marched through the city to Parliament House to protest the forced closure of Lake Tyers Aboriginal Station by the Aborigines Welfare Board. The rally was comprised of a coalition of First Nations activist groups, trade unions, supporters and allies. This demonstration was a landmark in the sustained and strategic political mobilisation that saw Lake Tyers declared a permanent Aboriginal reserve in 1965. The campaign incited and supported other claims to land and civil rights in the decades that followed. Image courtesy of Fairfax Media.

On the Mezzanine level, in the student locker area, outside the entry to GM 15 (David Derham theatre) a large-scale mural of Student Freedom Riders has been installed. The image depicts the student group Student Action For Aborigines organisation 1965 journey through NSW country towns to draw attention to racism and living conditions faced by Aboriginal people. The placement of this image in the Mezzanine student locker area locates the activity of student activism for Indigenous rights within a student space.  Image courtesy of Ann Curthoys/Wendy Golding.

We encourage you to take your time to engage with these murals with your teaching, events and/or studies.

This website may contain images or names of Aboriginal and Torres Strait Islander people now deceased. 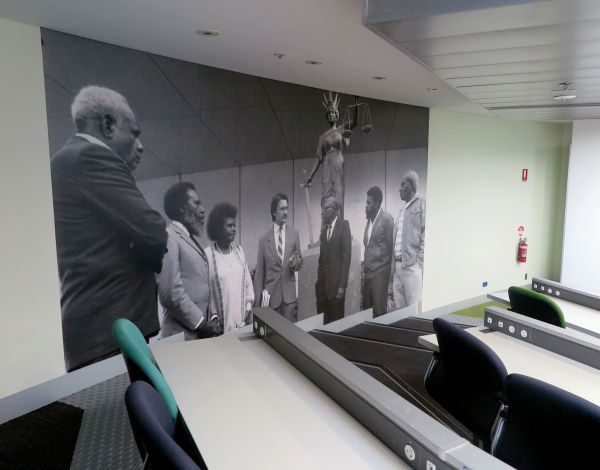 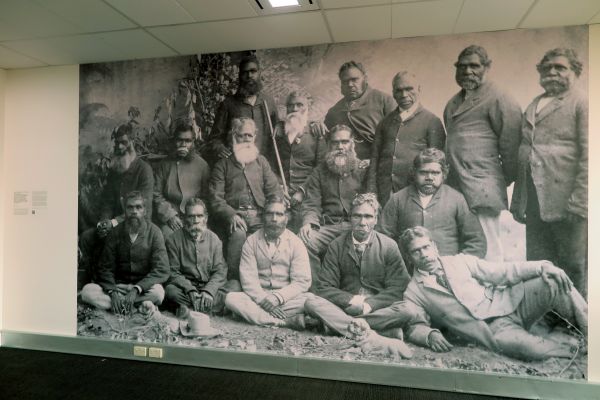 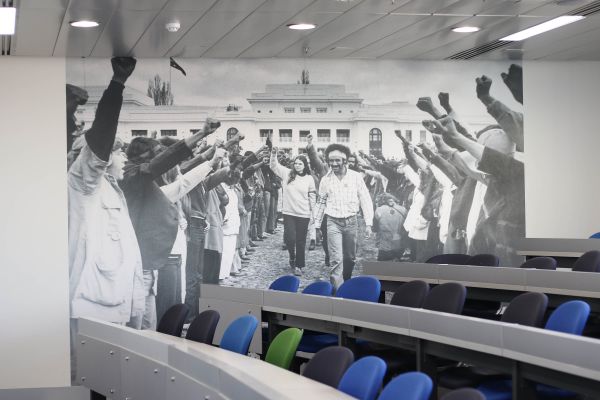 Installation of Aboriginal tent embassy officials arrive at the embassy after it had be re-erected on the lawns of Parliament House in Canberra, where over 1,000 Aborigines and their supporters demonstrated for Aboriginal land rights, 30 July 1972 at Melbourne Law School. 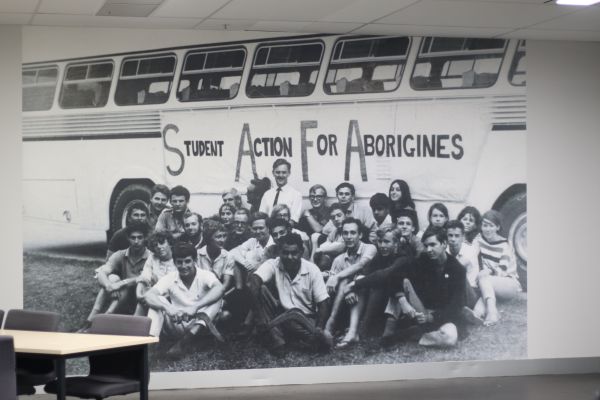