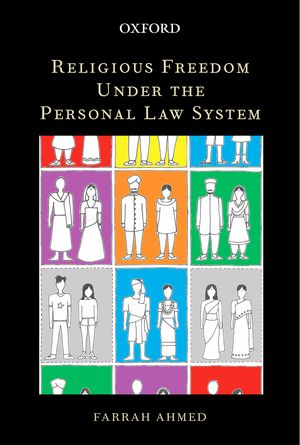 This book by Farrah Ahmed will be of significant interest to students and scholars of law, politics, and gender studies, as well as lawyers and policymakers across jurisdictions interested in multiculturalism, particularly contemporary debates on the legal accommodation of religious and cultural norms.

The Stability Imperative: Human Rights and Law in China, by Professor Sarah Biddulph 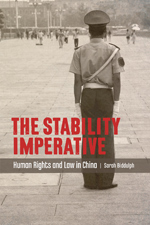 "Stability preservation" (weiwen) has long been an imperative of China’s one-party state. At the same time, the PRC has recently embedded a commitment to the protection of human rights in its constitution and has stated that it wants its citizens to share in the benefits of economic development and lead "happier and more dignified" lives. This book examines the multiple and shifting ways in which weiwen impinges on the legal definition and implementation of human rights in China.

Using case studies, Sarah Biddulph methodically examines the intersection of stability preservation and human rights in the PRC. Analyzing the state’s response to labour unrest, medical disputes, and forced housing evictions, she illustrates how conflict in these areas has damaged people’s livelihoods and led to serious social disruption. In turn, the state has reacted in a range of ways, from taking steps to ameliorate the underlying causes of the citizens’ grievances to the repression of rights-related protests and the punishment of protestors.

The Stability Imperative: Human Rights and Law in China reveals how the systematic failure of the legal system to protect rights coupled with an overemphasis on coercive forms of stability preservation is undermining the authority of law in China and could, ultimately, damage the Communist Party’s leadership.

China Lexicon is a unique bilingual guidebook covering the complex issues that arise when translating legal terms and definitions from English into Chinese and vice versa. It brings together fully updated and re-edited versions of the popular Lexicon columns published in China Business Law Journal.

Stacey Steele looks at Australia and Japan's relationship from the perspective of the Trans-Pacific Partnership today.   Stacey argues that there are few surprises for the bilateral relationship in light of the Japan–Australia Economic Partnership Agreement (JAEPA), but the TPP may offer increased integration opportunities for both countries in the region.

Bui Ngoc Son and Pip Nicholson glimpse some positive responses to calls by activists for constitutional reform in Vietnam.