Why are Australian wages lagging and what can be done about it? The Hon Professor Joe Isaac, University of Melbourne

Why are Australian wages lagging and what can be done about it? 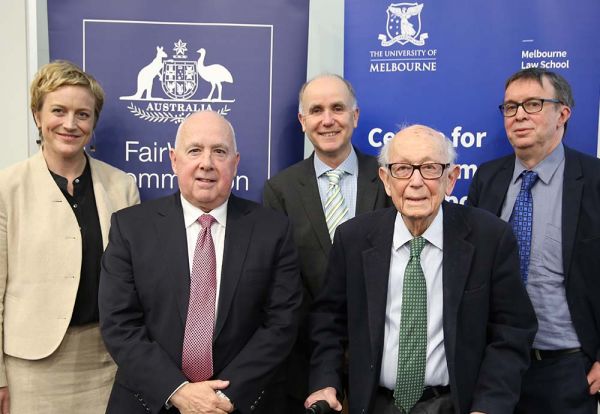 The Hon Professor Joe Isaac AO presented his paper 'Why are Australian wages lagging and what can be done about it?', published in the Australian Economic Review in June 2018. The event was chaired by Dr Tess Hardy, co-director, Centre for Employment and Labour Relations Law. Speakers included the Hon Justice Iain Ross AO, president of the Fair Work Commission; Jeff Borland, Truby Williams Professor of Economics, The University of Melbourne; and David Peetz, Professor of Employment Relations, Griffith University. The lecture was followed by a Q&A session with the speakers. Joe Isaac AO is Emeritus Professor of Economics from the University of Melbourne. He held chairs in Economics at Melbourne and then Monash Universities between 1962 and 1974 and was Deputy President of the Australian Industrial Relations Commission from 1974-87. He was Hon Professorial Fellow at Melbourne University from 1987-2016. He served as Deputy Chancellor at Monash University from 1980-88 and was President of the Victorian Industrial Relations Society in 1964, of the Economic Society of Aust and NZ in 1969, and of the Academy of Social Sciences in Australia from 1985-87. He holds a BA (Hons) and BCom from Melbourne University and a PhD from the London School of Economics of which he is a Hon Fellow. He is a Distinguished Fellow of the Economic Society of Australia.

Jeff Borland is Truby Williams Professor of Economics at the University of Melbourne. His main research interests are analysis of the operation of labour markets in Australia, program and policy evaluation and design, and Australian economic history. Jeff is a Fellow of the Academy of Social Sciences in Australia, and in 2010 he was the Visitiing Professor of Australian Studies at Harvard University. Jeff is currently President of the Victorian branch of the Economics Society of Australia.

David Peetz is Professor of Employment Relations at Griffith University. He previously working at the Australian National University and in the then Commonwealth Department of Industrial Relations, spending over five years in its Senior Executive Service. He has been a consultant for the International Labour Organization in Thailand, Malaysia, China, and Geneva and undertaken work for unions, employers and governments. He is a Fellow of the Academy of the Social Sciences in Australia.