A win for students and the community

On Wednesday 29 May, MLS hosted the Law Apps Awards celebrating a semester of hard work by Law Apps JD students. MLS spoke with the winners of the Law Apps Award about their experience of developing a community justice-centred app.

Taught by Gary Cazalet since 2005, the MLS Law Apps subject pairs groups of students with not-for-profit legal services to explore law, technology, and the ways these can be used to benefit clients.

“The client wanted an app that would streamline their complaint intake process”, Rajesh says. “Right now, all their intake processes are done over the phone and [a complaint] can take up to an hour”.

The key function of the Police Complaint Portal app was to give victims of police mistreatment the ability to quickly and easily seek help from PAP through a series of guided questions.

“[FlemKen] went on a journey with us to create the app. It was very much a collaborative effort”, Rajesh says.

The group worked with FlemKen to review the current complaint process and design a new, simplified system that would help save time and resources. “They were really welcoming and open to ideas we had. I think we were really lucky that they trusted us to make something”, Elisa says.

Through working with FlemKen and gaining advice from industry guest speakers in the Law Apps class, the group learned how technology is impacting the community legal sector and the law more broadly. Elisa explains, “it’s a good introduction, it gives you a sense of what’s going on”.

Throughout the semester, the group also developed their experience and skills in human centred design, project and client relationship management, animation and video design. “It was really good to get hands-on experience”, Rob says. Agreeing, Rajesh explains it “opens your horizons to what you can do with a law degree.”

“We succeeded as a group because we set expectations early on. We all knew we had strengths and weaknesses – but we played to each other’s strengths”, Ali says.

Rob agreed, “we quickly worked out our roles and timelines, and worked out what were meant to be doing”.

Assessing each app on usefulness, completeness, design, ambition, creativity and presentation, the judges came to the unanimous conclusion that the Police Complaints Portal was the winner of the night – as did the audience, who voted the app the winner of the Audience Choice Award as well. 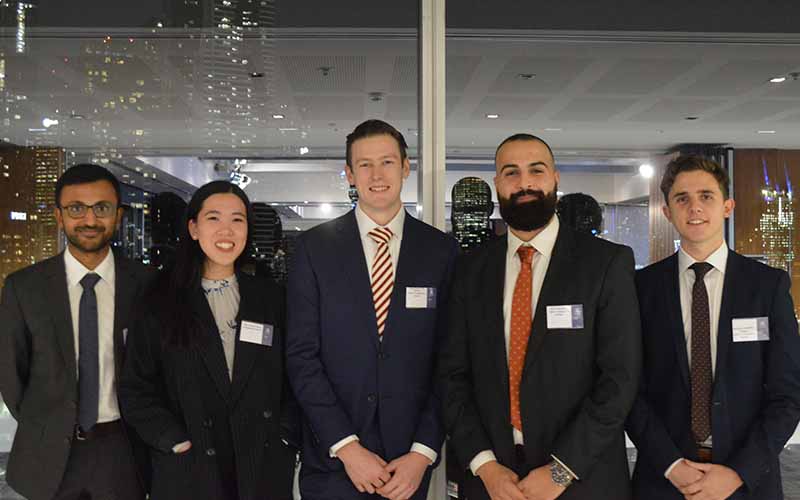 Despite the groups’ preparation and positive outlook, they were surprised to win both prizes. Ali says that “all the apps that were presented were amazing”, with Elisa reflecting that “despite it being a competition, everyone was so supportive of one another”.

“But it’s not about the prize, it’s the contribution we made to these communities”, Ali says.

The app also received overwhelmingly positive feedback from the client. Even though the subject has ended, Rajesh, Elisa, Rob, Ali and Matthew will continue to work with FlemKen to ensure the Police Complaints Portal app is ready to go live in a few weeks.