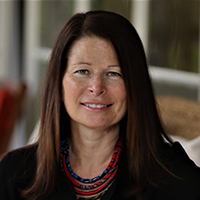 <MLS program and year of completion to be inserted here>

‘It was always in my blood’:

A career in human rights, from Springvale to Antananarivo

Sabina Lauber is speaking to us from Antananarivo, Madagascar. Her current role – as the Senior Human Rights Advisor to the United Nations in Madagascar – is a reflection of her extensive experience in the human rights sector, and a career that has taken her to locales as diverse as Mongolia and Switzerland.

Sabina’s role in Antananarivo and her work in human rights may appear to be a significant shift from her early education and career. Sabina graduated with Bachelor of Laws (Honours) and Commerce from the University of Melbourne in xx, and a Master of Laws from Columbia University, and spent her early years as a lawyer working in commercial law firm. For Sabina, however, growing up in a migrant family and navigating between two worlds meant that human rights work ‘was always in [her] blood’.

From Springvale to Melbourne Law School

In 1972, Sabina emigrated to Australia with her family as a small child. She would grow up in working-class Springvale before studying law and commerce at the University of Melbourne. As a post-war German migrant, Sabina’s early experiences of Australia were clouded by racism and xenophobia, which contributed to an interest in human rights that has shaped her career. These early experiences in a working-class, predominantly migrant suburb stood in stark contrast to her introduction to the University of Melbourne.

Sabina entered the University of Melbourne as part of a special access scheme aimed at increasing diversity across the university. Ormond College provided an unusual contrast to the spaces where she had grown up. At Ormond, the children of Australia’s elite would walk around barefoot, a world away from shoes being considered a hard-won protection from illness and progress out of poverty. Despite disparate upbringings, however, Sabina soon established friendships that endure to this day.

The University of Melbourne was a formative experience for Sabina, teaching her the skills foundational to her subsequent career, and where she discovered ‘learning the law didn’t have boundaries’. Feminist legal theory, taught by Jenny Morgan, opened a ‘whole new world’ of possibilities. Sabina and her classmates created the Women’s Law Collective, inviting women who had ‘climbed their way up’ through the legal sphere to speak on their experiences. Through her involvement with the Collective, Sabina became a founding member of the Australian Feminist Law Journal, which remains active to this day.

Beyond her academic studies, Sabina took the opportunity to expand her horizons and engage with people from diverse walks of life. She backpacked across Africa with a friend for an extended period, travelling from Zimbabwe to Morocco. They spent nights ‘sleeping under the stars’ in Mali, with limited communication with friends and family back home. These travel experiences expanded Sabina’s perspective of the world, and helped her envision a future career outside of Australia.

For Sabina, the path to a career in human rights was not linear. Academic success in her undergraduate studies in law and commerce led to a position in corporate law upon graduation. Working in the corporate sector allowed Sabina to develop a strong foundation in  practical legal skills, refining those skills in the real world and provided an opportunity for her to become familiar with ‘how the law manifests itself in practice’.

Despite the valuable legal experience Sabina gained in the corporate sphere, she found corporate work to be ‘so boring’ and ‘didn’t feel passionate about it’. Sabina remained engaged with NGOs and human rights throughout university and her early career. She has described this breadth of experience as ‘always [having] a foot in another door’. In pursuing opportunities to stay connected to human rights, Sabina was determined to find work beyond the corporate world.

An opportunity to work in policy at the Australian Law Reform Commission ‘taught [Sabina] how the legal system works’, beyond simply learning cases. Sabina noted one example, in which she was involved in a review of litigation costs, a project which highlighted the intersection of diverse interest in the practice of law and presented a ‘wonderful mix of corporate work and human rights’. This initial experience in human rights in an Australian context provided the basis for Sabina’s subsequent career in the international sector.

Since her introduction to the human rights sector, Sabina has worked in a variety of countries on diverse, complex issues throughout her career to date, predominantly for the United Nations. Among other locales, she has worked in Thailand, Mongolia, Sudan, Malawi, Madagascar, and Switzerland. Sabina’s extensive experience is embodied in practical application. Experiences in Malawi and Madagascar demonstrate the importance of varied experience, applying communication and cultural understanding to the protection of human rights.

In her previous position as the Senior Human Rights Advisor to the United Nations in Malawi, Sabina worked with religious leaders to uphold human rights standards, including in connection with conflict between Muslim and Christian communities. A key issue was Christian-owned and run schools banning girls wearing hijabs in school, which prevented many Muslim girls from attending school. Sabina’s ability to facilitate communication across cultures, including between religious leaders with complex histories, ultimately resulted in a national agreement allowing girls to attend schools in hijabs, ensuring alignment with international human rights standards.

Sabina’s varied experience is further reflected in her work concerning the persecution of people with albinism in Madagascar. When reports emerged of discrimination and physical attacks perpetrated against people with albinism in Madagascar, Sabina recognised similar patterns of behaviour from earlier experience in other regions of Africa, associated with specific superstitions connected to people with albinism. As a result, Sabina was able to work with police and policy makers to engage in a holistic human rights approach; coordinating customs and excise law, criminal law, and police powers to effectively tackle the issue and ensure human rights standards were upheld. This is an example where the ‘law is really helping’: a new NGO has been created, and Madagascar now celebrates International Albinism Awareness Day on 13 June.

Human rights has the capacity to make an active difference in people’s lives, particularly in the application of practical experience to produce meaningful change. For example, Sabina’s work in the human rights sector has been influenced by her degree in commerce and her economics expertise, which contributed to her deeper understanding of the complexities of capitalism and development. Sabina emphasises that ‘human rights can’t stand on its own’; instead, meaningful change in this sector is the product of diverse areas of expertise, and collaboration across disciplines.

Realities of the Human Rights Sector

Sabina presents human rights as a framework of understanding and ethics, with the capacity to transform people’s lives. According to Sabina, her work in human rights is ‘not that glamorous’. Speaking to young people with a desire to work in this sector, Sabina feels that working in human rights should not be the product of ‘arrogance’, or a ‘desire to be superhero’, however well-intentioned.

Working in human rights is serious, hard work. You may experience the impact of ‘shocking’ poverty and the horrors of war. Your freedom to move around outside may be limited, particularly for women. There is a significant sacrifice involved in this life, and you risk being traumatised by the work. During her time in Nepal, for example, Sabina’s work in transitional justice involved finalising a report of war crimes, using work compiled by more than 200 people over several years. Resilience is vital.

In exchange for the long hours, however, you have exceptional opportunities: to gain a deep connection to a country, to discover beautiful places, and to find your ‘kindred spirits’ across the world. For any career, Sabina emphasises the importance of finding your own area of expertise. Success is found in becoming a specialist in your own field.

Sabina’s career in human rights has been shaped by her past experiences: her upbringing in Springvale, her experiences at Melbourne Law School, and her early legal career. She emphasises the importance of legal skills and practical experience, resilience, and the vitality of maintaining a ‘strong sense of self’.

Despite the difficulties of a career in the human rights sector, this is vital and affirming work. For current law students, Sabina’s advice is to ‘get out there’: develop your own legal skills, and find your own opportunities to make a difference. Can you finish with a personal reflection – 1 or 2 lines eg: Its advice we will both take on as we try to chart our own journey from MLS into a career that can make a difference to lives of others as Sabina has done over the past 25 years.