In 1956 the American jazz singer Nat King Cole was visiting Melbourne when he found himself playing an unexpected role in one of the highlights of the social calendar for the Melbourne Law Students' Society (LSS). 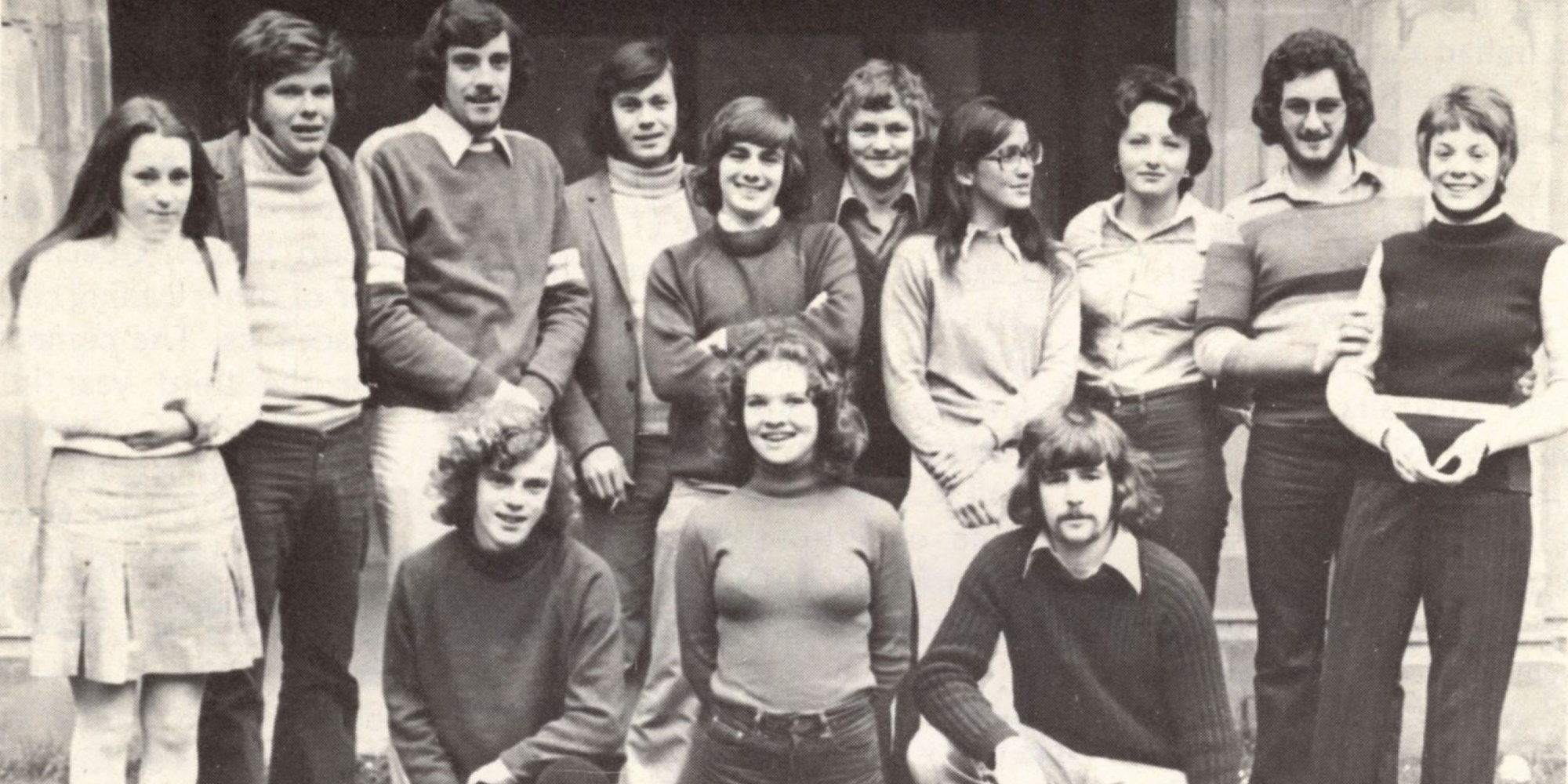 Former secretary of the LSS, Graeme Rees-Jones RFD ED (LLB 1960) recalls the day: "We were gathered outside the Hotel Australia in Collins Street dressed in costumes of national garb of different countries for a 'Welcome to Melbourne for the Olympic Games'. In the middle of the gaieties, the singer Nat King Cole suddenly appeared on the steps of the Hotel Australia and he was clapped and cheered."

"The downtown rags were quite traditional in the life of the Law School and University…They were the monster events for Melbourne Law School students each year," explains Rees-Jones.

Rees-Jones and other former members of the LSS have been sharing memories of Melbourne's student organisation that span almost 60 years. The sense of fun and warmth that run through their recollections is unmistakable. Although the issues that engaged each generation of students ebbed and flowed, the constant is the central role the LSS played in the experience of a student at Melbourne Law School.

The "Law Students' Society" as the name for the organisation constituted to champion the interest of law students first appeared in 1892. This new name for the ailing Articled Law Clerks' Society represented a widening of its membership to embrace, for the first time, both degree students and articled clerks.

Former LSS colleagues, John Date OAM (LLB 1957, LLM 2008) and Graeme Rees-Jones, have initiated a project to capture the history of the student organisation. Date was president in 1956 and Rees-Jones was secretary in 1956-57; their contemporary His Hon. Graham Fricke QC (LLB(Hons) 1956) is currently working on a history of the organisation.

The historic LSS minute book is providing the bedrock for the research. Recently conserved, this calf-bound tome records meetings of the LSS from 1939 to 1971. However, the research team are hoping that alumni can help them fill in the story around the dry formal minutes. They are looking for memorabilia, photographs, stories and documents of the organisation that will help to tell the history of the LSS.

Date describes the student body of the 1950s as being well bonded and highly engaged with the LSS. He recalls an annual general meeting with 300 students in attendance: "That was pretty much the whole of the faculty. There was a strong interest in student activities and in what the LSS was doing. In those days it was quite an honour to be elected to an office".

Sport featured prominently in the activities of the LSS in the 1950s, often extending to inter-faculty competitions against traditional opponents such as the Engineering or Agricultural faculties. The marbles matches against the engineers became infamous: "A lot of them were abandoned because of the ultimate chaos," laughs Date.

Social events organised by the LSS were also central to the extracurricular life of a law student. Special events included the annual At Home which was the law students' ball and dinner dances cheekily named "Petting Sessions". And, of course, there were the downtown rags which took student high spirits into the centre of Melbourne, not always to the amusement of police and the upper echelons of the university.

The decade also saw the first of the LSS conferences. Held off-site, the program included distinguished speakers, visiting members of the judiciary and discussions on legal topics. "One of the difficult jobs of the LSS secretary was to find a venue," says Date. "The law students developed a reputation for unruliness and were not allowed back to the same venue twice."

One of the major campaigns for the LSS at this time was an issue that would continue to challenge law students over the decades.

"In those days the Law School didn't have their own premises. They used to go around to the various lecture theatres such as were available. They had a small library. But Dean Zelman Cowen was pushing to get a separate building and the law students agitated quite seriously in support of that," says Date.

Thirty years later the issue of space would still be a central concern for the LSS. President in 1981, Tim Mason (LLB 1982) worked to organise social activities that would unite a student body that was fragmented without a physical focus. "There was no use of the quadrangle. There was no hub apart from the library. We were pretty cramped for space. So we needed something to draw the elements together."

Looking back on his time with the LSS, Mason points to the Australasian Law Students' Society conferences as major highlights. Students were encouraged to give papers at the interstate conferences held variously in the early 1980s in Queensland, South Australia and Victoria. The LSS organised buses to facilitate participation by Melbourne students.

Mason also recalls promoting mooting competitions within the Law School, with the LSS organising visiting barristers to demonstrate the skills of cross examination to the students. Mooting was a fairly new activity for Melbourne students. While individual students had participated over the years in the Jessup International Law Moot Court Competition, an internal law school mooting competition open to all students had only been introduced two years earlier during Fran O'Brien's presidency of the LSS.

Fran O'Brien SC (LLB 1981) was one of the first female presidents of the LSS (Miss Airlie Smith is recorded in 1941 as the only woman to hold the office previously). Recalling the LSS in 1979, O'Brien sees the introduction of a mooting competition as her most important contribution: "At the time, people were very enthusiastic about it. It was the students who started it, with the support of the Law School".

O'Brien based these early mooting competitions on problems modelled around those used by the English Inns of Court and she organised external adjudicators from the Bar. Fellow LSS member, Greg Craven (LLB(Hons) 1980, LLM 1984), now Vice Chancellor of the Australian Catholic University, persuaded one of the large law firms to donate a cup for the competition.

Over the decades, curriculum content has been an important question for law students. One of the significant issues for the LSS of the late 1970s was representing student views on subject choice.

"There was a view, incorrect or not, that the law school was fairly unresponsive to preparing students for practice," says O'Brien. "There may have been a pedagogical argument to say that their conservative approach was correct. They were teaching the principles of law… but there was a view that it was perhaps too narrowly based. And so one of the issues for us was preparing students better for practice."

The history of the LSS is a record of student innovation and exploration of ideas for expanding the student experience, both within the classroom and beyond. When asked about the willingness of LSS members to get involved, Mason says there was a sense of young people being in charge of themselves for the first time.

O'Brien reflects that youthful enthusiasm also helped: "It was a lot of work, but when you're young, you've got so much energy… The critical issue that I think you learn is that nothing will happen unless you do it yourself….. If you want to achieve things, you've got to go out and actually do them."

The skills learnt by many members of the LSS were certainly carried forward to careers in a wide range of endeavours. Many prominent figures of the legal profession, the Bar and the judiciary, as well as those in politics, business and the public sector appear on the list of former LSS members.

"It was experience in political life," says Date. "A lot of people got experience at the level of running meetings and being aware of the legal technicalities. And of being a leader… it was like an introduction to their future life."

While serving on the LSS undoubtedly brought valuable skills and experience, all the former members agree that friendship was a lasting legacy.

"I think the fondest memories are the making of friends, the companionship, meeting people of similar interests, developing relationships with people that went on for many years in the law," reflects Date.

Remembering the LSS of her own generation, Fran O'Brien sums up the spirit of the organisation.

"They were just a really good mob of young people… it was the fellow feeling and the sense that we were doing something constructive… It was a really good time."