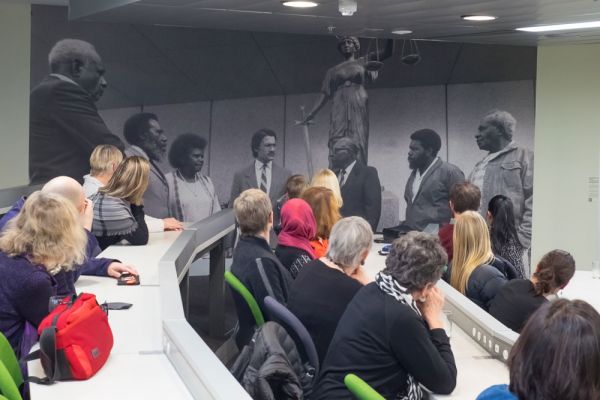 A series of images that give prominence and due recognition to Indigenous law and jurisprudence are being installed in the MLS building as part of the Law School’s Reconciliation Action Plan.

The first image was installed during NAIDOC Week and depicts the plaintiffs in the case of Mabo v Queensland (No 2) (1992) 175 CLR 1 with supporters and one of their lawyers in the Supreme Court of Queensland in 1989. A second image, which shows the 16 Kulin men who comprised the 1886 Coranderrk deputation to Victorian Parliament to farewell the retiring Chief Secretary Graham Berry, was installed in September.

“We are seeking to express our commitment to recognition and reconciliation in the physical environment in which we come together as a Law School community,” he says.

“MLS is a place where Indigenous and non-Indigenous Australians, along with people from all over the world, meet to learn and understand each other’s laws.

Additional imagens chosen for their national, historical and legal significance will be installed as part of the initiative in other MLS teaching spaces.