For the five students who took part in this year's Jessup moot, acclaim and glory following their win in Canberra and their participation in the World Final in Washington DC was just a bonus. The moot team comprised Felicity Ryburn, Seamus Coleman, Sonja Zivak, David Heaton and Sienna Merope. 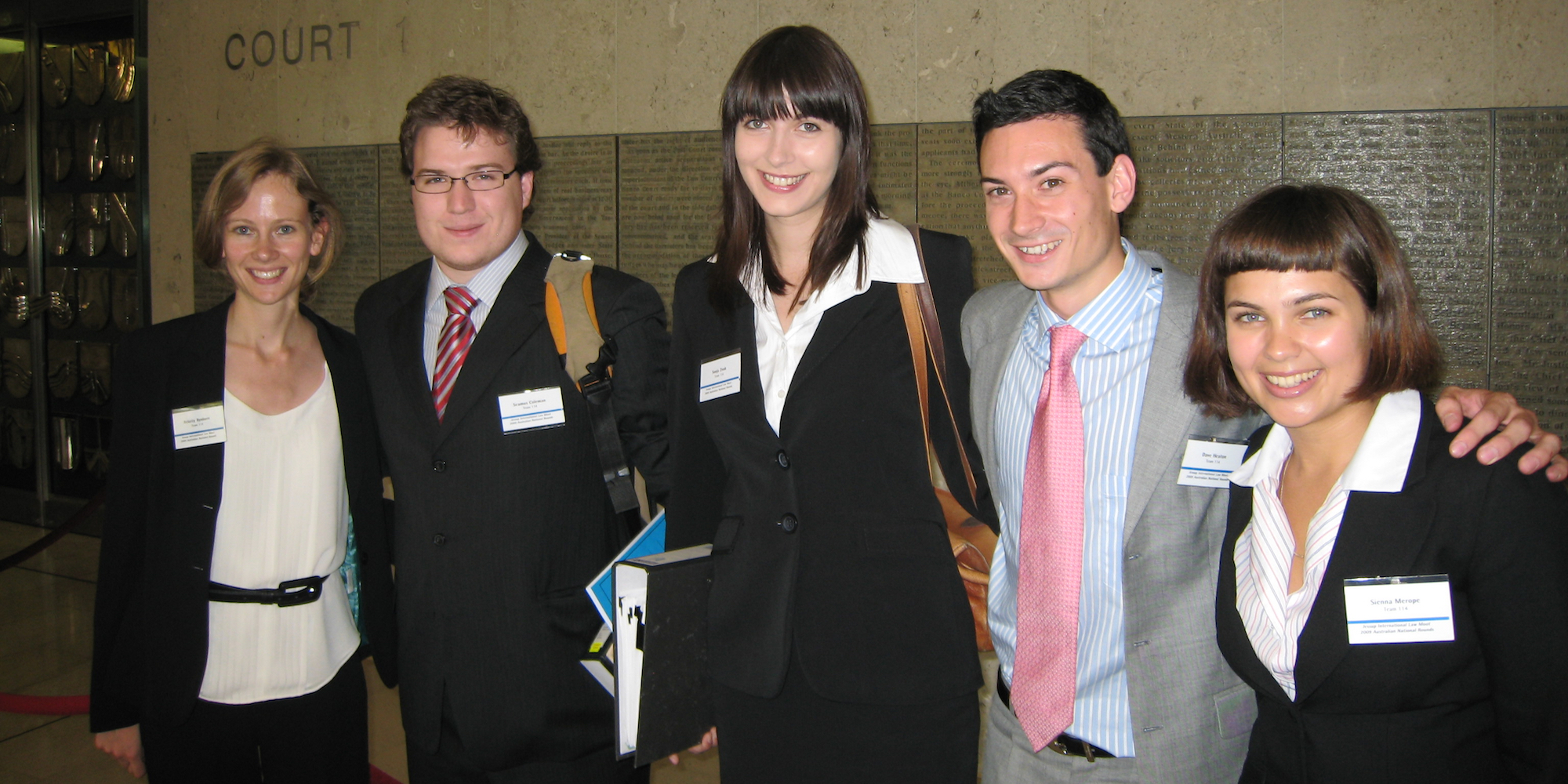 While the mooters all relished the opportunity to compete in the High Court before The Hon Chief Justice Robert French and MLS alumnus Professor Hilary Charlesworth AM (LLB (Hons) 1980), the real highlight was what Sienna Merope describes as "those moments of knowing you've figured something out as a team – they were the most intellectually stimulating and rewarding, and they are what built the five of us into such a close team and good friends."

Speaking about their experiences, the mooters modestly gloss over their achievement in beating 14 other Australian universities in Canberra, as well as teams from Malaysia, Guyana, Belarus and the UAE at the international qualifying rounds. Instead, they emphasise the myriad opportunities that participating in the Jessup moot has opened up for them. Sienna confidently asserts that "you learn more from the Jessup about law generally than you could hope to from any other experience… The people you meet – academics, Jessup alumni, and other competitors – are valuable legal contacts." Sonja Zivak concurs, explaining that "the Jessup moot completely changed the way I think about the law and taught me invaluable advocacy and reasoning skills that I can apply to any problem I encounter from now on."

David Heaton had previously competed in the winning 2006 – 2007 WTO moot team. Following that success, he undertook an internship in Geneva. Now that  the Jessup moot is over, he has been busy co-presenting a paper in Geneva to a wide range of WTO and government officials with his former coach, Associate Professor Andrew Mitchell, as part of the WTO Appellate Body Secretariat's Speaker Series. Like his teammates, David is deeply grateful to the coaches. He affirms the "amazing opportunity has really only come about because Melbourne has people like Associate Professors Andrew Mitchell and Tania Voon, who are regarded as leaders in their fields." David is now participating in a prestigious World Trade Institute summer course at the University of Bern. He feels his mooting activities have placed him in an advanced position for this course and he has enjoyed meeting representatives of various national governments, NGOs, and multinational corporations. David is living proof of the global experience that Melbourne Law School strives to offer its students.

Unlike David, Sonja was new not only to mooting but to law. She joined the team only two months after commencing the JD. Sonja's undergraduate studies in journalism and literature have equipped her with powerful communication skills.

Sonja ordinarily has to work to support herself. Since recently being awarded the DLA Phillips Fox Geoff Masel scholarship, she has been able to "keep part-time work to a minimum, resulting in more freedom to pursue extracurricular  activities." Those extracurricular experiences are of vital importance to how law is now taught at Melbourne Law School. Students are encouraged to pursue global experiences, thus becoming equipped with real-world skills and exposed to truly outstanding opportunities.

The Jessup moot completely changed the way I think about the law.

David echoes Sonja's enthusiasm for learning beyond the classroom, declaring the Jessup moot "a fantastic extra-curricular activity that vastly supplemented my previous studies in international law. The skills that you pick up in terms of advocacy are of global application," he said.

Melbourne Law School thanks Allens Arthur Robinson, Jessup International Law Moot Inc. and Mallesons Stephen Jaques for their generous support of our students in this competition.