"Thanks to France I've learnt that there are very different holistic perspectives on law and life in this world, shaped by history, culture and language," says Melbourne Law School's Professor Cheryl Saunders AO. 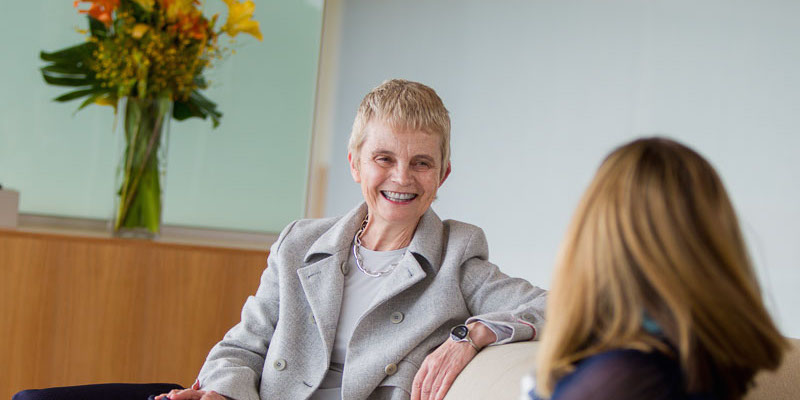 Now France is showing its appreciation to Professor Saunders by honouring her with the country's highest accolade, the Lègion d'honneur.

Professor Saunders is one of Australia's foremost experts in constitutional law. The Melbourne Law School Laureate Professor holds a personal chair in law, and is Associate Dean of the Melbourne Law Masters, which she has helped to transform into an internationally renowned program.

Over the last decade Professor Saunders has lent her academic expertise in comparative constitutional studies to the resolution of real world issues. She has had practical involvement in the processes of constitution making and revision in countries such as Fiji, Sri Lanka, South Africa and Iraq. The work has been undertaken with the belief that those with highly specialised expertise can be a resource for countries making a constitution, without usurping their process.

When Moroccan scholars, working with the International Institute for Democracy and Electoral Assistance, evaluated the revision of their country's constitution following a year of political tumult in 2011, Professor Cheryl Saunders was one of three international constitutional experts there to provide a comparative constitutional  perspective.

Recalling the project, Professor Saunders' enthusiasm is palpable. "It was the most interesting exercise," she says. "The process itself was innovative. But the opportunity that it offered to get a real insight into someone else's constitutional system through the eyes of the Moroccan scholars  was  absolutely  amazing."

The excitement Professor Saunders expresses about her international work betrays not only her passion for the subject, but the deep commitment to understanding constitutions globally that has fuelled the trajectory of her career.

This year's prestigious honour recognises the significant contribution Professor Saunders has made to France – she taught for many years as a visiting lecturer at University Paris II – and her role as President of the International Association of Constitutional Law (IACL) from 2004 to 2007.

Presenting the Légion d'honneur, Mr Stéphane Romatet, Ambassador of France to Australia, commended Professor Saunders for her work as former president of IACL, a post he described as the constitutionalist equivalent of "a conductor achieving the dream of conducting the Vienna Symphony Orchestra". It is an enormously prestigious and demanding role in an organisation that brings together the leading scholars in constitutional law from around the world.

Professor Saunders first became involved in the IACL in the early 1990s. The timing could not have been more auspicious; she arrived in Warsaw for a world congress just after the fall of the Berlin Wall. "The atmosphere was extraordinary,"  says  Professor  Saunders. "The  association had originally been established in the early 1980s as a bridge between the communist and non-communist world. Now it was no longer needed for that purpose. It had to reinvent itself by reaching out to the world as a  whole."

In 2004 Professor Saunders became president, and  learnt French for her role as head of a bilingual organisation, an undertaking she laughingly describes as "occupying". She felt that it was very important for the organisation to have a global vision. "I thought it was essential to ensure that it was genuinely global, actively involving not only countries from Europe and North America, but Africa, Asia and Latin America."

Professor Adrienne Stone, who is also a member and a Melbourne colleague, says that Professor Saunders has been a driving force in the association.

"She really knows a lot about many countries. I'm convinced I could hike to the top of Everest and  someone would say, 'Oh, you must know my friend Cheryl Saunders'. She is, without doubt, a very important international figure and she has been absolutely  steadfast in her determination that she, as a comparativist, will have a vision that is truly global."

When asked about the origin of her deep interest in constitutional law, Professor Saunders confesses to a love for history and an interest in politics. "I'm interested in how the states of the world actually work, so constitutional law dovetails very naturally with those other two disciplines."

In 1988 she was founding director of the Centre for Comparative Constitutional Studies (CCCS), the first in Australia and the only organisation of its kind in the region. In today's globalised world it is not difficult to see the value that lies in comparative studies, but a quarter of a century ago the idea was new.

"It was completely novel," laughs Professor Saunders. "By the time we were setting up the centre, I had started to become involved in comparative constitutional law internationally. I began to realise how fascinating it was and how comparative work could shed light on the way that we do things in Australia."

"We worked on the general idea that you need to give people a proper insight into what is involved in their constitution, and that you need to do this in words that are not too highfalutin and in a way that they can trust," she explains.

CCCS is now based in the Law School building under the directorship of Professor Adrienne Stone. It continues to lead the area of comparative constitutional studies in Australia and the region through activities such as research, teaching, consultancies, research collaboration and a resource centre. Professor Saunders points to the strong cohort of public law scholars with comparative expertise as a major achievement.

"The level of public law expertise at Melbourne is extraordinary … I think the spinoff over time has been to continue to consolidate the strength and the quality of public law, including comparative public law, at the Law   School."

"We have a very innovative suite of public law subjects in the Juris Doctor program. We have a specialisation  in government law in the Melbourne Law Masters.

We've attracted some of the best scholars in the field and visitors from all parts of the world. And we have an amazing group of PhD students who are working on public law topics ranging from human rights in Ethiopia to the proposal for indigenous constitutional recognition."

Professor  Saunders'  colleagues,  including  Professor Michael Crommelin AO who joined Melbourne Law School on the same day in 1975, enthuse about her ability to inspire students. "She's an outstanding teacher. I meet past students all the time who not only remember her but go out of their way to say what an impact she had on their careers – and on their whole attitude to the law," says Professor Crommelin.

"She's visionary, she's inspirational, and she's generous. And she has a formidable intellect."

All these qualities were celebrated by family and friends on the evening in July when Professor Saunders was presented with the Légion d'honneur by the French Ambassador to Australia. With characteristic modesty, her thoughts were with the conferring nation as she accepted the tribute.