In 1989, a young lawyer by the name of Ian Fullagar completed the only sports law subject then offered in the Melbourne Law Masters – Sport, Commerce and the Law. It was just the second year the subject had been offered. 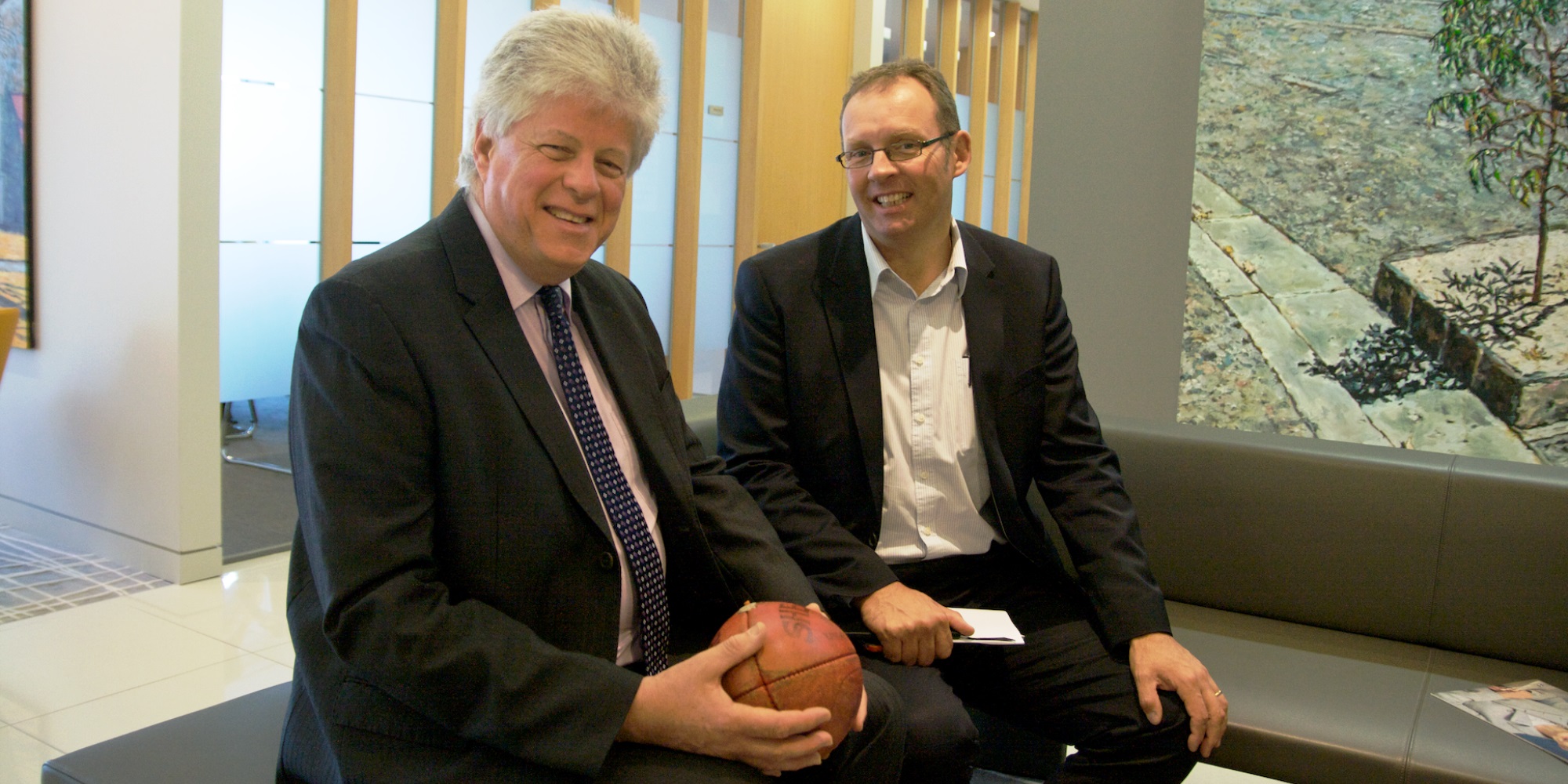 Ian Fullagar (LLM 1995), like others in the class, was involved in sport outside his work in law. At that time, competitive athletes had jobs to support themselves and received little remuneration from their sporting performances.

Today, more than two decades on, it is a very different story for Fullagar, the sporting profession and the Melbourne Law School Sports Law Program which is gearing up to celebrate its 25th birthday. From one flagship subject, the program is now internationally recognised as one of the leading programs of its kind in the world. It offers 12 subjects in total, spanning sports and competition law, sports marketing law, taxation of sport, sports dispute resolution, racing, industry law and regulation, to name a few.

"The program and the sports law industry have both grown greatly," says Hayden Opie, Director of Studies and founder of the Sports Law Program. "In the early days, employment opportunities in sports law were limited. Now employment has expanded to firms, sports organisations, international bodies and government as sport has become increasingly commercialised."

Ian Fullagar is now internationally recognised as a leading sports lawyer and advisor and also holds a number of significant roles in sport, including Director of the Victorian Institute of Sport. He was recognised in the 2010-12 editions of Best Lawyers (Australia) for his expertise in the area of sports law.

Fullagar, who went on to complete a LLM, says the subject Sport, Commerce and the Law helped him to understand how the law needs to be used to assist sport and strengthen its particular position in Australian society. He has encouraged young lawyers and others working in sports administration roles to undertake the program or single subjects to help ensure they are at the cutting-edge of legal developments.

Like Fullagar, former student Eugénie Buckley (LLM 1997), who later lectured in the Sports Law Program, says it helped demonstrate to her in the late 1990s that this was a growing area of law.

"Obtaining specialist sports law qualifications provided me with an edge in this fledgling area of law," says Buckley, who now works as a sports consultant providing strategic advice to major events, media and sporting bodies and was a member of the International Court of Arbitration for Sport for eight years. "All of this assisted me to convince Ebsworth and Ebsworth (now HWL Ebsworth) to establish a sports law practice."

Olympic rowing medalist and former student Margot Foster (LLB 1980), who completed Sport, Commerce and the Law and is Chair of Vicsport agrees. "Sport is much more formalised in every respect: athlete training, public expectations, sponsorship interest, doping, gambling, athlete contracts, the full-time athlete, the importance of good governance of boards in lieu of the kitchen table operation and increased government involvement including in funding. There is an increasing recognition of the importance of sport in everyday life."

Ironically, the first Sport, Commerce and the Law class coincided with what was then the biggest doping scandal in the history of sport – Ben Johnson had been found guilty of taking performance enhancing drugs at the Seoul Olympics. Opie recalls this provided lively discussion and says it highlighted legal issues that remain part of sport today.

Opie originally proposed the subject Sport, Commerce and the Law after completing post-graduate studies at the University of Toronto. There he concentrated on legal issues but was also exposed to sport's inner workings in a course on the political economy of Canadian sport taught by former elite runner Professor Bruce Kidd. For some Melbourne colleagues, sports law represented a novel if not strange notion, but Opie is grateful for the support shown over the years.

Today, with an increasing amount of legal activity facing sporting clubs, the 12 subjects draw on a rich tapestry of content.

"The recent media coverage on anti-doping issues in cycling and the AFL, broadcasting regulation and collective bargaining, and claims of match fixing all highlight the need to have people with the expertise to navigate these and a myriad of other legal issues," said Opie who led the formation of the Australian and New Zealand Sports Law Association (ANZSLA).

Eugénie Buckley agrees that the role of the law in sport has become clearer and more demanding.

"The sports industry will continue to evolve and the law will always continue to have a key role in this evolution."

A who's who of the sports industry has taught in the program and shared their perspectives and knowledge to the next generation after forging successful careers.

"Two of our lecturers in Sports Health and Medical Law, Dr Peter Harcourt and Dr Peter Brukner, have relished the opportunity to share their extraordinary experiences and they say they have learnt as much as they have passed on," said Opie.

"In some cases, the students in the classroom are at the coalface of what is happening. Many have gone on to hold senior legal and management positions in Australian and world sport. The program has also attracted a number of international leaders in the field to teach and I think it's a reflection of the quality of the program. If it wasn't regarded as world-class, it's unlikely it would attract such high profile people nationally and internationally."

For former student Simon Lethlean, it's the networking opportunities that have been the most valuable aspect to his career.

"The Sports Law Program enabled me to develop some relationships with legal colleagues from other sports," says Lethlean, who is General Manager - Broadcasting, Scheduling & Legal Affairs at the AFL. "It also helped me apply some of the AFL and other sports specific circumstances to sports focused legal training – it provided some invaluable learnings, but also enabled me during the classes to apply the theory or the problem to AFL issues and develop my knowledge as well as communicate that knowledge to other participants."

Opie says the program attracts a diverse student body, from lawyers working in any area of the law but with a passionate interest in sport recreationally, to those seeking to build a career in sports law, to the simply curious following their interest.

With such extraordinary developments this year, heightened by the Lance Armstrong doping revelations, the program will continue to ensure those in the industry keep ahead of the rapid changes.

"The clubs and players have become more competitive. The size of the industry has developed dramatically," says Lethlean. "Sport in this country and its coverage, its revenue earnings, its participation, its influence on infrastructure development is only increasing… sports lawyers, who are critical in a lot of the deals or instruments, are required to shore up this growth."