A barrier to change: submission calls for spent convictions 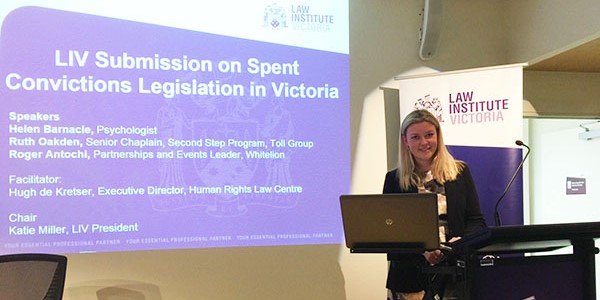 Annamiek interned at the Law Institute of Victoria as part of the subject Legal Internship.

Over four months, the 26-year-old researched and drafted a submission urging the State Government to enact spent conviction legislation. This would mean that people do not have to disclose their minor criminal convictions and findings of guilt after a period of time.

The submission recommends less serious crimes should disappear from adults' criminal records 10 years after they have been convicted.

The proposed scheme would apply to sentences that attract no imprisonment or a sentence less than 30 months. Spent convictions and findings of guilt would not be required to be revealed. Exceptions to this would be sexual offences, in line with all other jurisdictions.

"It was on the government's platform when it was elected as something that they would look into, so this was a good opportunity to write the submission. Victoria is the only jurisdiction in Australia that doesn't have this legislation in place," Annamiek says.

"It's really trying to help those people that are one-time, or ex-offenders move on with their lives and not be burdened with the stigma of a criminal record," she says.

The Law Institute of Victoria submission argues that disclosing criminal convictions for minor offences many years after the event can have a "dramatic and disproportionate effect" on lives, including preventing people from obtaining jobs and insurance.

With a background in criminal law, Annamiek strongly believes that prisoners can be rehabilitated. Writing this submission, a motivating factor was to see prisoners treated humanely, a belief that formed when visiting Barwon Prison for a high school excursion.

"Just seeing prisoners speak as humans, as real people, I didn't see them through the stigma of doing the wrong thing," she says.

"I really heard them and thought I would like to look more into that and how they could be helped."

Annamiek says the main benefit of the recommendations outlined in the submission being introduced would be that ex-offenders are supported in their integration into society.

"Criminal records are becoming such a resource now for many things. If there is one entry on your record – it does not tell the full story but it can be a significant barrier," she says.

"For example, if a HR rep reads that someone has a record, they don't necessarily know the full story behind it. It is such an easy way for them to disregard a person's job application."

"TOLL has a program where they hire prisoners straight out of the Port Phillip Prison's youth unit. Over 95 per cent of participants remain addiction and offending-free more than eight years after commencement. Someone has trusted them and taken them on and that means the world to them."

Without this support, "They are stuck with the stigma for life and often that will lead them to re-offend if they are labelled as a criminal," she says.

The greatest learning from this experience was that a legal education can be used in a variety of ways.

"You don't have to be practising, and have real clients, to be contributing to justice," she says.