For more than 10 years women have outnumbered men in law schools, with more women entering the legal profession on graduation, translating into a profession where around 70 per cent of all practitioners are women. 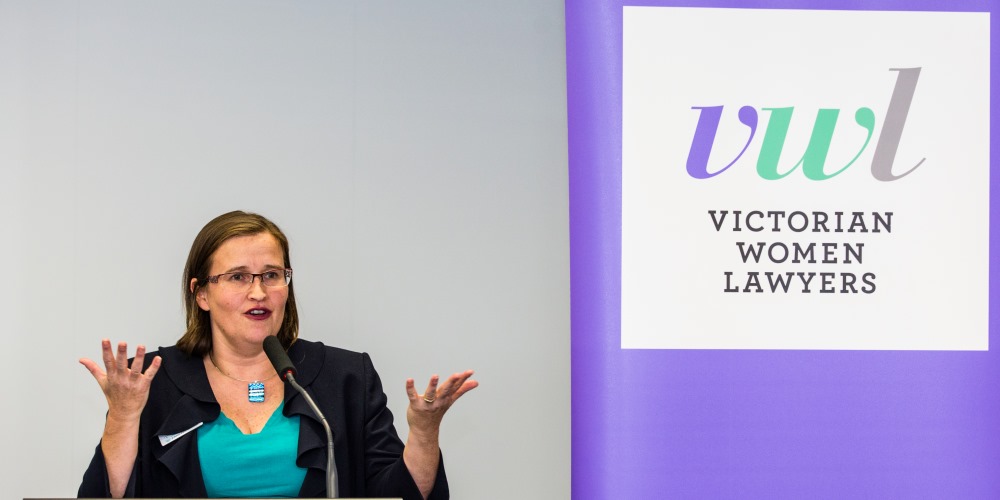 On closer inspection, the numbers reveal another reality; while women dominate the profession in terms of sheer numbers, they do not dominate senior leadership positions. So what's going on and when will it change?

When Victorian Equal Opportunity and Human Rights Commissioner Kate Jenkins (LLB 1992) was at Melbourne Law School in the 1980s, she had no idea that the legal profession outside the University gates looked any different to her campus experience.

"Even then in the law faculty there were at least as many women as men. I guess I thought that fight had been done," she reflects.

By the time she became a partner, the perspective from the senior ranks was quite different.

"I was really shocked to reflect on the fact that I was one of the few women at the partnership table."

Separate pieces of research reveal consistent findings; more women than men leave the profession within five years of starting out, and between the ages of 35 and 55, the numbers of practising women lawyers falls by around 75 per cent. The 25 per cent that continue to practise are a minority in partnerships, making up about 17 per cent of equity partnerships nationally.

It is widely agreed that the sheer 'weight of numbers' of women graduating from law schools is not going to shift the balance at senior levels; the annual exodus remains.

"Firms lose a significant investment in education and experience when women leave legal practice – not to mention the impact on a firm's talent base resulting from the loss of those skills and that expertise. That can't be a good thing – no organisation benefits from losing its investment or its talent," explains Victorian Women Lawyers (VWL) Convenor Kirsten Adams (LLB(Hons)  1996).

"It is about creating better organisations – better firms. Gender balance and diversity at senior levels of a firm brings more voices to the table and makes for a stronger, more adaptable and resilient firm.  Embracing diversity also sends a powerful message that the firm is not homogenous or 'old school' but is a contemporary work environment that is open to change and can adapt and celebrate difference. Clients want to see that and so do potential employees."

Ms Jenkins says what is true for law firms is true generally, and makes the point that the business case has been made many times over.

"Research tells us that organisations perform better with diversity (not just gender balance) at senior levels. The business case is that when you have diversity, then people in a room act and behave differently, think differently and ultimately get a better result. It's about an attitude – an organisation that values diversity and difference is more open to ideas and innovation – and more can come forward. The mix is important," she explains.

Given the case for gender balance at senior levels, and the apparent commitment to it, why does it still exist decades after it was identified and what moves have been made to deal with it? Is the law inherently different to any other sector?

"There are similar issues of gender inequality in different sectors, but each sector is slightly different in how that looks. But we're all part of the same attitudes to women which make it an issue," says Ms Jenkins.

Basically through social conditioning and unconscious bias we associate men with work and leadership and women with family and nurturing.

She adds that her work at VEOHRC "has made me realise that with the law, it's 'same same but different.' Ninety per cent of the issues are the same as everywhere else, 10 per cent is what's different between the sectors."

I was acutely aware of the imbalance. In fact, I made my decision about which fi ms I wanted to work at based on the number of female partners they had

She muses that the 'difference' in the law is that career progression can depend on many 'discretionary moments' rather than strict processes. While noting that "change is hard," she adds that "firms need to closely examine their review processes and especially where the discretionary moments are and the impact on key career progression milestones." That, and getting much better at making flexible work practices a part of firm culture for men and women.

In April, the VWL launched Flexible Work Protocols; A best practice guide for productive and engaged legal workplaces. It is their latest attempt to redress the balance and tackle the key barriers identified most recently in the 2014 report of the Law Council of Australia's National Attrition Study (NARS), based on the experiences of 4000 women lawyers nationally.

Ms Adams says the protocols address the critical issues that will make a difference as well as what the profession struggles with: adoption of flexible work practices and ways to foster the careers of women lawyers so they stay.

"Firms must actively support flexible work practices for women and men, in order to bring about transformational change in the culture of legal workplaces. The latest research shows that active sponsorships and mentoring are critical elements to addressing the gender imbalance. The good news is that forward thinking firms are doing all these things and more," says Ms Adams.

Kate Marshall (GDipIPLaw 1995), a member of the VWL Work Practices Committee, Partner at K&L Gates and Chair of the firm's Gender Committee, recalls being very aware of the gender imbalance at the outset of her career. She remembers when many firms had policies that women could not wear trousers and very few had senior women partners.

Ms Marshall is positive about the rate of change and recalls that around the time she had her first child, there was a fairly standard 'no part-time' policy in firms.

There was a lot of pressure to come back early; there was no paid parental leave. Now it is a normal part of working life to have a year off and there is support offered to women while they are on maternity leave to stay engaged. I'm not saying it is perfect, but it is much better.

She believes that apart from policies, and tools like the protocols that legal workplaces adopt, change will come when work cultures evolve.

"The most important thing is to recognise that the issue is not going away, and not to get complacent. We always need to ask, what else can we do? How is what we're doing working? It needs to be championed right from the top, built into the fabric and culture of the firm."

The mood for change is palpable: "The problem is understood and acknowledged by all," says Ms Adams. "Let's fix it.""We've had 20 years of work. There's a move I think to accelerate the rate of change," says Ms Jenkins, who is 18 months into a five year appointment. "And I am pretty impatient to get change during my term as Commissioner." i