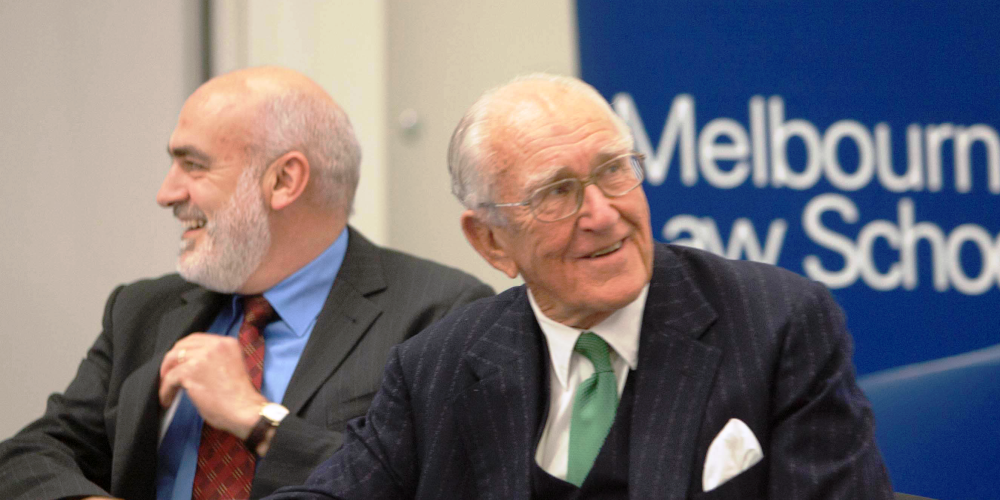 "I received a phone call from Mr Fraser, who at the time was co-chair of the InterAction Council, a group of former Heads of Government who met annually to discuss issues of global concern. Mr Fraser explained that one of the upcoming issues for discussion was IHL and Humanitarian Intervention. He said he required assistance to organise a roundtable of experts at the John F Kennedy School of Government at Harvard University. I was more than happy to help," recalls Professor   McCormack.

Professor McCormack travelled to Harvard, and then later to Berlin at the former Prime Minister's request, where Mr Fraser presented the Harvard report to positive feedback. Rather than merely accepting the credit of his peers, Mr Fraser specifically mentioned Professor McCormack's integral role in writing the report.

"I was so touched by this. I knew that former Heads of State are accustomed to others writing their public speeches and reports, and I never agreed to work on the basis of such acknowledgment. It was an exceptionally kind gesture − intellectually honest – but not necessary," Professor McCormack says.

From here onwards, a friendship formed between Mr Fraser and Professor McCormack and over the years that followed, the two maintained a close working relationship. Mr Fraser was incredibly generous with his time and became a frequent presence within the Law School.

"There was obviously his immense physical presence and stature, but more significantly, Mr Fraser was the centre of attention by virtue of his intellectual acuity. He shared his opinions with my Melbourne Law Masters students in a way that was so robust, and laced with examples of global leaders he had interacted with over the years," Professor McCormack says.

This generosity extended beyond Mr Fraser spending time at the Law School. The University of Melbourne has acted as the official custodian to Mr Fraser's personal papers and library since 2004. The Law School houses the Malcolm Fraser Library, which has been transferred from Mr Fraser's Office following his passing.

The library forms part of the Malcolm Fraser Collection – the papers of which are housed in the University of Melbourne Archives. The collection spans several generations of the Fraser family, including a copy of the Australian Constitution originally owned by his grandfather Sir Simon Fraser, a founding Senator for Victoria in the fledgling Commonwealth Parliament, and photographs by his father of Indigenous Peoples in Arnhem Land. More recent exhibits include Mr Fraser's letters advocating for the human rights of asylum seekers.

"Mr Fraser asked me if the University would be interested in his personal papers. He studied at Oxford, but did not want to send anything to the UK because he thought there would be little interest there. He also explained that the National Archives were only interested in the documents pertaining to his time as Prime Minister.

Instead, Mr Fraser wanted the collection at one place, here at the University where they could be readily accessed by researchers," Professor McCormack explains.

As Prime Minister of Australia from 1975 to 1983, Mr Fraser was responsible for changing the face of Australia, advancing multiculturalism through the acceptance of Southeast Asian refugees. During this period, Mr Fraser led a series of economic and social policy reforms.

"I remember taking a Vietnamese refugee to meet Mr Fraser. The man came to Australia by boat with his father in the late 1970s and wanted to thank Mr Fraser personally for changing his life for the better. Upon meeting the former Prime Minister, he asked why Mr Fraser had allowed him to stay in Australia, and Mr Fraser told him that 'it was the  right thing to do'", Professor McCormack says.

"One of the things I admired most about Mr Fraser was just how much he cared. He cared about people, cared about Australia and its future, and he wasn't afraid to speak publicly about the best interests of the nation," Professor McCormack said.

"There was a public perception that politically Mr Fraser had moved to the left, but he insisted that his party had moved so far to the right that he could no longer be associated with what he felt they now represented," Professor McCormack explained.

During his later years, Mr Fraser used social media to offer his opinion on current government policy. For him, the impetus to use digital media to communicate his political views was a deeply personal one.

"There was a moment during Mr Fraser's funeral service when one of his granddaughters remembered teaching her granddad about Twitter. She retold the story of how she asked, 'Grandpa, how many Twitter followers do you have?' Mr Fraser wasn't entirely sure what the question meant. The next time they met, Mr Fraser was proud to tell his granddaughter that he had now amassed many thousands of online followers," Professor McCormack said.

In 2006, Mr Fraser was appointed Professorial Fellow at the Asia Pacific Centre for Military Law, and delivered his inaugural professorial lecture titled "Finding Security in Terrorism's Shadow: The importance of the rule of law" in October 2007.

It was a unique, mutually beneficial relationship that Mr Fraser possessed with Melbourne Law School. Professor McCormack says he and a team of researchers regularly provided Mr Fraser with legal research assistance.

It was important to Mr Fraser that whenever he had something to say, it be well-researched and thorough. His involvement in the public debate was so significant that we as a Law School felt happy to support him and to be a part of it.

On December 22, 2011, Mr Fraser's immense contributions were formally recognised by the conferral of an honorary Doctor of Laws from The University of Melbourne.

During his acceptance speech, Mr Fraser realised that he had mistakenly forgotten the latter half of his speaking notes. Despite having nothing to read from, and standing before an audience of thousands, he remained as unflappable as ever.

Unperturbed, Mr Fraser spoke directly to a cohort of law graduands from the University with an improvised address that emphasised the importance of ethical decision-making. It was almost as though the stage had been purposefully set for Mr Fraser to speak his mind.

"Many of you will find through the course of your careers that you will be faced with dilemmas, of conscience, of ethical behaviour for what is right or wrong, of adherence to the law or its evasions. The dilemmas many of you may face, the choices you may have to make at different points in your careers will sometimes be difficult", Mr Fraser said candidly.

Mr Fraser was cognisant that he was addressing a future generation of leaders. He spoke about following one's beliefs.

"Difficult decisions might mean going outside the mainstream. It could mean standing alone against those who believe that any action is justified in the pursuit of power, and that the people in positions of authority can stand outside the law," Mr Fraser continued.

There are many words that can be used to describe Mr Fraser. Over the course of his storied career, Mr Fraser demonstrated himself to be an innovative, stately and generous leader, someone who stood tall as an advocate for humanitarian and social issues. This legacy endures at Melbourne Law School, and Mr Fraser cements his position in Australian history as a true leader who stood by his morals to always do what he considered right, without fear of public opinion.

Professor McCormack says the challenge now is for people who have benefitted either from personal connections to Mr Fraser or through his life's work to continue in his footsteps and take a public stand on issues of principle.

Instead, we ought to follow in his footsteps to the extent we can."