The Melbourne School of Government this year partnered with the Susan McKinnon Foundation to deliver the inaugural McKinnon Prize in Political Leadership, a new, non-partisan award recognising courageous, visionary and collaborative political leadership. 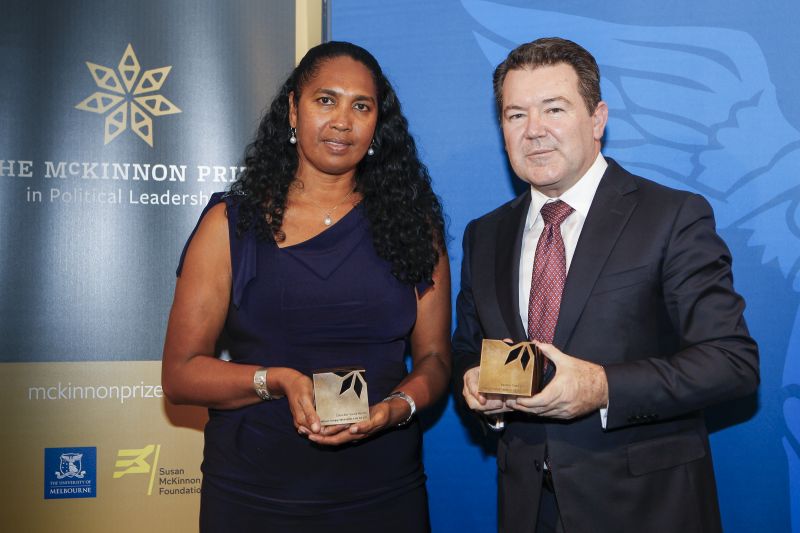 The Melbourne School of Government this year partnered with the Susan McKinnon Foundation to deliver the inaugural McKinnon Prize in Political Leadership, a new, non-partisan award recognising courageous, visionary and collaborative political leadership.

Senator Dean Smith was named the McKinnon Political Leader of the Year for tackling vital issues of public policy, overcoming adversity and achieving real change for the public good.

Senator Smith was commended for his bipartisan leadership on same sex marriage and his demonstration of courageous backbench leadership in the face of internal opposition and diversity of public opinion within Australian society.

“It’s a great honour and privilege to be the inaugural award winner,” Senator Smith says.

“It’s my hope the award will encourage others to have the confidence of their convictions and to recognise the opportunities that can be realised by looking beyond traditional partisan lines.”

Councillor Vonda Malone was named the McKinnon Emerging Political Leader of the Year, for politicians with less than five years in office, for her outstanding leadership as Mayor of Torres Shire Council.

Cr Malone was recognised for her efforts to bring together her community, shedding light on pressing issues such as unemployment, housing shortages, waste management, community engagement, health and wellbeing. She convened numerous dialogues and networking events across all levels of government.

“I am truly honoured to receive such a distinguished award,” Cr Malone says.

“This recognition has reaffirmed that my representations for the Torres Strait are having an impact towards achieving much-needed outcomes.”

Professor Davis says the prize celebrates political leaders at all levels of government and will spark a national conversation about the role of politicians and public aspirations for leadership in Australia.

This article originally appeared in MLS News, Issue 19, May 2018.