It's not each individual detail, but the combination of them that makes Mark Woods (LLB 1980) an unusual sort of lawyer. 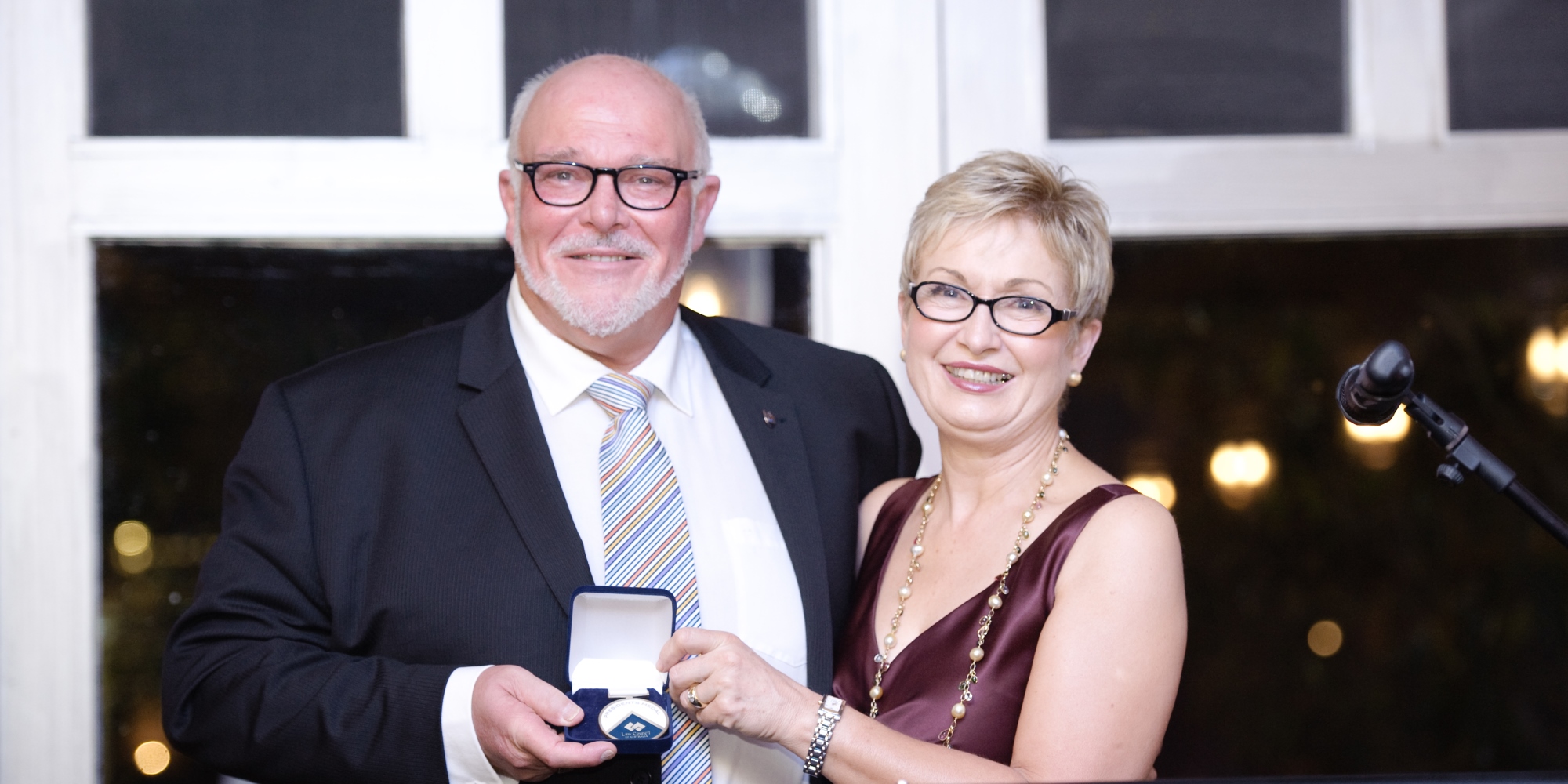 For starters, Woods is probably best known publicly as one of the 'brains trust' on the popular ABC TV program The Einstein Factor. The 'brains trust' comprised an eclectic bunch that appeared to share the attributes of smart, funny, fearless and with unexpected combinations of talents. It included the likes of Barry Jones (LLB 1966), Waleed Aly (LLB (Hons) 2002), Jean Kittson, Jennifer Byrne, Paul Grabowsky and Red Symons.

Of course, Woods is well known in the profession for his leadership roles and awards – most recently the 2012 Law Council of Australia President's Medal for his continuing work in promoting access to justice. But let's talk more showbiz.

In the past few decades he has trod the boards in various acting and singing roles with the LaTrobe Theatre Company – including Horace Vandergelder in Hello Dolly, the Wizard in The Wizard of Oz, Rudolf Schultz in Cabaret, plus the odd production of Oscar Wilde works. He is also a classically trained pianist, accredited church organist and member of the Royal School of Church Music.

With that background, and a personality that can only be fairly described as extrovert –"I do like the sound of my own voice," he confesses good naturedly – was he drawn to advocacy?

It was a reason he joined a regional law firm in Gippsland (now called Tyler Tipping Woods with offices in Traralgon and Morwell and employing 40 people).

"I can remember spending half a week's pay on stamps for job applications. I got four job offers, one was for a position in Gippsland which included advocacy. The advice I got was to go where I would get the widest experience."

Discussions with his girlfriend (later his wife) clinched the decision – she was a teacher and the Education Department was crying out for teachers in regional areas. "The petrol was cheap. The rent was cheap. My girlfriend could easily get a job and we thought it could be a bit of fun for a few years."

Within 12 months Woods was a partner in the firm, taking the spot of a retiring partner. They never moved back to Melbourne. Indeed, he has become an outspoken champion of 'a country practice': "You don't lose a few brain cells if you work more than 10km from the CBD," Woods says.

"There is variety. There is lifestyle and the ability to make a very good living 10 minutes from home. Technology means I can (and do) a lot of committee work and conferences via video link. Travel time is not an issue and I'm more efficient. There is a real resurgence of rural and regional practice, and unless you're in litigation, it makes perfect sense."

He once considered a career in medicine but a student barbecue at the University of Melbourne cured him: "We were having a joint law/medicine student barbecue; I was sent to get the meat which had been organised by the med students and they had kept it cool in the morgue. It was the 70s. But that was it for any ideas I had about medicine."

Woods was driven to pursue law by a deep sense of fairness instilled in him by his parents and his experience of growing up in Broadmeadows.

"I saw a lot of disadvantage. I saw people being badly treated by bailiffs. I was in the unusual situation that I was fortunate enough to go to Essendon Grammar School which was completely different. I travelled the Broady train every day; back then I saw people being victimised by the police on the train."

Woods particularly remembers the ability of one of his teachers to explain the impact of different applications and interpretations of the law, and how it could result in good or bad outcomes. He was keenly interested in politics and the importance of the rule of law:

"We studied the Soviet Union. There was the Cold War and the Vietnam War. We were in the aftermath of the Whitlam dismissal. There was a lot going on."

His teachers encouraged him; "No-one in my family had been to uni before me, let alone been a lawyer," Woods says. "I was very lucky – I was able to go to uni because we didn't have to pay fees." Woods remains the only lawyer in the family – his three children chose IT, horticulture and music.

Arriving on campus in 1977, he remembers Melbourne Law School as an energetic, intellectually robust campus: "I had no preconceived idea of what it might be like – how could I? But it was a time of big issues – about education policy, the beginnings of concern about the environment. America was really starting to flex its muscle internationally. We had 'sit-ins' and protests. I was there in the time that Robert Clark [now Victorian Attorney-General] took on Melbourne Uni about compulsory unionism – as a student he went to the Supreme Court and won."

Since graduating in 1980, Woods has invested heavily in his commitment to access to justice. "We have a hybrid system in Australia. If you have money, you will have access. If you are really on the bones of your backside, you will get help. But everyone inbetween – including low/middle income Australia – misses out.

We know from studies that around 70% of justiciable matters go nowhere – things like being ripped off by a contractor. People give up because the law is too expensive for them. We should be very ashamed and very concerned that this is what our system has come to."

His urge to assist people – and to act – is practical as well as philosophical. Woods was awarded an Australian Commendation for Brave Conduct for rescuing two people in extreme conditions off the 90-mile beach in 1999. In another, much larger scale and horrific emergency – the 2009 Black Saturday Bushfires – he joined Gippsland colleagues to coordinate pro bono assistance for people and community groups who had lost everything, including documents and papers to prove what they owned, what they had lost, and what they were entitled to.

The citation for the President's Medal mentions this work, and more – including his roles establishing the Law Aid Trust, as Law Council Director and on the Access to Justice Committee (currently as Chair). Woods is the longest serving council member of the Law Institute of Victoria (elected in 1992) and was its first country president (1995-96). He sits on numerous committees and boards, including the Leo Cussen Centre for Law, the Victoria Law Foundation and the National Pro Bono Resource Centre.

Of the medal, he says: "I have been a proud member of the LIV (and Law Council) for 30 years. I have the utmost respect for those organisations and what they do for the profession and the community. So it meant an enormous amount to me".

While he occasionally thinks 'what next?', the reality for Woods is that the profession has opened doors and provided a means to pursue his interests (legal and otherwise) and create change. He doesn't dream of retiring and running sheep (he already does that) or the quiet life. He does, however, think deeply about what can improve access to justice for all people – including those who still live at the end of the Broady line and other places like it.

"I think the solution lies in the profession getting people to understand properly what a legal problem is, and to understand how the profession can actually help them. We also need to forget about 'go to whoa' lawyering. We have a reasonably well-educated population and they can handle a lot themselves with little guidance from their lawyer, who can then step in at the appropriate times. And finally, the governments have to get serious about legal aid – the evidence is well documented that for every dollar spent on legal aid we save many more downstream."

Without question, Mark Woods has the energy to see it through – and probably fit a few other things in along the way."