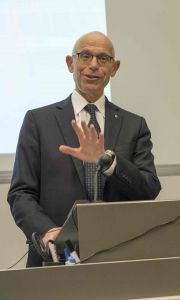 Abstract: It has been just over two decades since the significant reforms known as “National Competition Policy” were recommended by an Independent Committee of Inquiry in Australia.  In the 4th Annual Baxt Lecture, the architect of the reforms, Professor Fred Hilmer, will revisit the goals of National Competition Policy and reflect on the benefits that have been derived for the Australian economy and community from its implementation. He will also examine whether key aspects of the reform package have lived up to their potential, including reforms relating to the institutional framework (the role of the National Competition Council, in particular) and reforms relating to access to essential services (governed by Part IIIA of the Competition and Consumer Act 2010 and currently the subject of review by the Productivity Commission). Professor Hilmer will also argue that there has been a decline in political commitment to competition policy in recent years and, in exploring the reasons for and consequences of this will focus on the demise of regulation review. He will make a case for revitalising the scrutiny of regulations for anti-competitive effects, a process that may resonate with business demands to ‘cut red tape’ but that also highlights the post-GFC challenge of striking the right regulatory balance between safeguarding economic security and stability on the one hand and fostering innovation and competitiveness on the other.

Professor Frederick Hilmer was appointed President and Vice-Chancellor of the University of New South Wales on 19 June 2006. Prior to taking up this position, he was Chief Executive Officer, John Fairfax Holdings Limited from 1998 - 2005. Before joining Fairfax he was Dean and Director of the Australian Graduate School of Management (AGSM) in the University of New South Wales and a Director of Port Jackson Partners Limited. Prior to joining the AGSM, Professor Hilmer was a Director of McKinsey & Company - responsible for managing the Australian practice. He holds a degree in law from the University of Sydney, an LLM from the University of Pennsylvania, and a Master of Business Administration degree from the Wharton School of Finance where he was appointed a Joseph Wharton Fellow. In 1991 the Australian Institute of Management awarded him a special John Storey medal for distinguished contribution to the advancement of management thinking in Australia. Professor Hilmer was appointed an Officer of the Order of Australia in 1998 for his service to management education, competition policy and workplace reform.