Much evidence from recent antitrust cases casts doubt on the ability of conventional remedies to restore competition in digital markets. In her presentation, Professor Gal considers three untested remedies for antitrust enforcement in digital markets: mandatory sharing of algorithmic learning, subsidization of competitors, and temporary shutdowns. Whilst these remedies are radical as they go beyond halting specific anti-competitive conduct by actively seeking to restore structural conditions favouring competition and entail government interference with freedom of enterprise and property rights to a substantially higher degree than the market-driven process which normally governs antitrust remedy design, these remedies fall short of outright economic regulation in that they aim to restore the competitive process and not to impose a competitive outcome. All three remedies create complex trade-offs and require careful balancing before implementation. 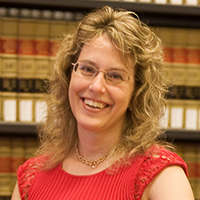 Professor Michal Gal is Director of the Forum on Law and Markets at the Faculty of Law, Haifa University, Israel. She was a Visiting Professor at NYU, Georgetown, Melbourne and Lisbon. Professor Gal is the author of several books, including Competition Policy for Small Market Economies (Harvard University Press, 2003). She has also published scholarly articles on competition law issues and has won prizes for her research and for her teaching. Inter alia, she was chosen as one of the 10 most promising young legal scholars in Israel (Globes, 2007) and as one of the leading women in competition law around the world (Global Competition Review, 2013). Her paper, Merger Policy for Small and Micro Economies, won the Antitrust Writings Award for best paper on merger policy in 2013.

Gal served as a consultant to several international organisations (including OECD, UNCTAD) on issues of competition law in small and developing economies and is a non-governmental advisor of the International Competition Network (ICN). She also advised several small economies on the framing of their competition laws. She is a board member of several international antitrust organisations, including the American Antitrust Institute (AAI), The Antitrust Consumer Institute, the Asian Competition Law and Economics Center (ACLEC), and the Academic Society for Competition Law (ASCOLA). Sarah is a full-time commissioner, and a former senior executive lawyer with the Australian Government Solicitor. She brings to her role extensive experience in government legal work, including restrictive trade practices, consumer protection and law enforcement litigation.

Sarah takes an active role in the Commission’s enforcement and compliance work, and engages closely with investigating teams and lawyers on Commission policies and enforcement investigations.

Sarah holds a Bachelor of Arts (Jurisprudence) and a Bachelor of Law (Honours) from the University of Adelaide as well as a Graduate Diploma in Legal Practice from the ANU. She is a Fellow of the Australian Institute of Company Directors.