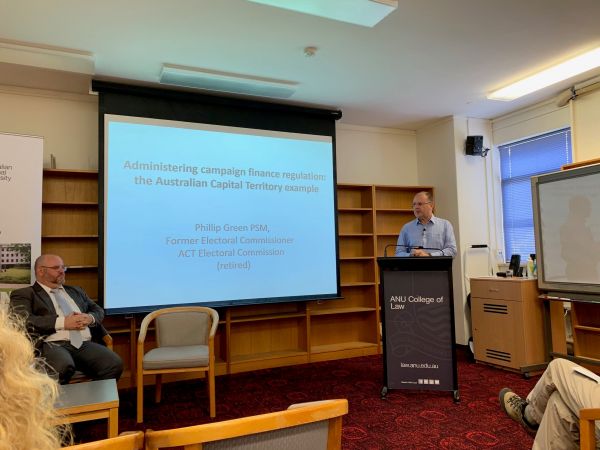 Over the past few years various Australian governments have grappled with enacting and administering laws designed to regulate political donations and election campaign finance. This seminar brought together speakers who examined campaign finance regulation from two distinct perspectives.

Benjamin Smith examined the constitutional questions which arose in the High Court’s decision in  Unions NSW v New South Wales [2019] HCA 1 (29 January 2019) focusing particularly on what guidance the decision gives to Australian governments who are seeking to amend campaign finance regulation laws.
Phil Green drew on his practical experience administering the campaign finance regulation scheme that operates in the Australian Capital Territory under the amendments made by the Electoral Act 1992 (ACT).  Together they sought to identify some of the reasons this area of electoral regulation can be so ‘troublesome’.


Phil Green PSM served as the ACT’s first full-time Electoral Commissioner from 1994 to 2017. He was responsible for the conduct of 7 general elections for the ACT Legislative Assembly. During his tenure as Electoral Commissioner, Phil pioneered a range of electoral innovations in the ACT, including electronic voting and counting, scanning of ballot papers and networked electoral rolls in polling places.  Phil also oversaw the implementation of the ACT’s comparatively rigorous campaign finance scheme, which has included caps on donations (now repealed), limits on electoral expenditure, low disclosure thresholds and frequent on-line public reporting.

Benjamin Smith is a PhD candidate at ANU College of Law, who is particularly interested in constitutional issues. He has practiced in criminal, family and administrative law and has been involved with the union movement. He currently works with the ANU College of Law''s Law Reform and Social Justice (LRSJ) program.