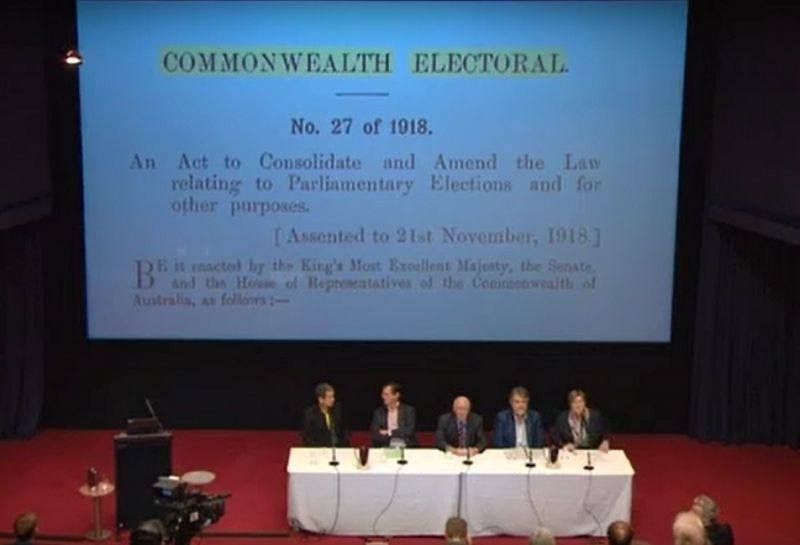 The 21st of November 2018 is the centenary of the granting of Royal Assent to the Commonwealth Electoral Act 1918. That law, still in force, has structured the conduct of federal elections in a way that has led Australia to be regarded as one of the world’s outstanding electoral democracies.
To mark this significant occasion, the Electoral Regulation Research Network and the Australasian Study of Parliament Group held a joint seminar at which four prominent speakers reflected on the significance of the Act from a number of different perspectives.

Dr Peter Brent is a leading authority on the historical development of independent electoral administration in Australia. He is an Adjunct Research Fellow at Swinburne University of Technology, writes regular commentaries for the Inside Story website, and tweets on electoral matters at @mumbletwits.

Dr Stephen Mills formerly lectured at the Graduate School of Government, University of Sydney, on public sector leadership. He has been a speechwriter to former Prime Minister Bob Hawke, and a journalist and editor for The Age, Australian Financial Review and the Sydney Morning Herald. His acclaimed 2014 book The Professionals: Strategy, Money and the Rise of the Political Campaigner in Australia was awarded the 2015 Henry Mayer Book Prize for Australian Politics by the Australian Political Studies Association.

Mr Brien Hallett is a former Usher of the Black Rod in the Department of the Senate, previously headed the Communications Branch in the Australian Electoral Commission, and served as Deputy Official Secretary to the Governor-General.