A conversation with the Hon. Chief Justice French AC

A young Robert French was in the third year of his science degree when he gave a presentation on research that demonstrated a relationship between certain mathematical groups and elementary particles. 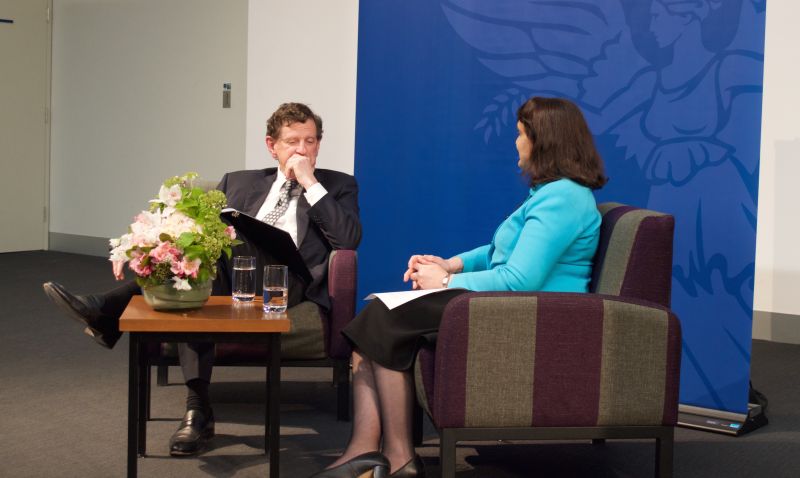 Reflecting on his presentation the Dean of Science said to him, “You express yourself magnificently but I’m not sure you know what you’re talking about.”

Recounting the tale to a full house at a Melbourne Law School public lecture on Monday, French quipped, “I’ve often said to others, thus encouraged and qualified, I enrolled in law!”

And so began the legal career of the Perth solicitor and barrister who went on to serve as a Judge in the Federal Court for 22 years. He also headed the National Native Title Tribunal, served as a member of the Supreme Court of Fiji, took on the role of Deputy President of the Australian Competition Tribunal, and in 2008 became the Chief Justice of Australia.

The Honourable Chief Justice Robert French AC is retiring from the High Court on 29 January 2017. In a conversation style event hosted by MLS Dean Professor Carolyn Evans, Chief Justice French reflected on some of the key lessons he has taken away in his remarkable career.

“One of the early lessons that I learnt was the importance of courtesy coupled with firmness on the bench,” he said.

“I took it as something that I should try to follow, both as a judge and subsequently of course as Chief Justice.”

This model of courtesy is something Chief Justice French also extends to his own colleagues on the High Court.

“I propose the cases that we will hear in any given sitting and the judges that will make up the bench.”

I circulate it under the heading proposal. This reflects the collegial character of the court and the fact that the Chief Justice cannot tell anybody to do anything. The Chief Justice is one among equals.”

Chief Justice French found it impossible to nominate a particular case from his time on the High Court that would leave the biggest mark on the Australian legal landscape.

“The influence that a particular judgement will have may well depend on what happens down the track, contingencies that I can’t control or can’t foresee, the kinds of cases that come before us and the composition of the court.”

He did highlight the case of Kirk vs the Industrial Relations Commission of New South Wales as one that did stand out as being particularly significant.

In this 2010 judgement, the High Court quashed an original ruling by the NSW Industrial Commission to convict and fine the Kirk Group of contravening the Occupational Health and Safety Act 1983 (NSW). A number of workplace health and safety prosecutions across Australia have since been challenged on these grounds of this ruling.

In a wide ranging conversation, French also reflected on some of the interesting cases he dealt with during his time as a Federal Court Judge, a sessional judge on the Supreme Court of Fiji, his role in setting up the Aboriginal Legal Service WA and his position as the President of the National Native Title Tribunal between 1994 and 1998.

His advice to future lawyers reflects the diversity of experience he has enjoyed in his own career.

“There are many people who do law degrees who aren’t necessarily going to be legal practitioners. A law degree has a huge variety of useful purposes,” he said.

“Secondly, if you are going to be a legal practitioner, you should keep an open mind about where the path of your career is going to take you. Don’t lay down a celestial blueprint right at the start, because it might lock you in and close off opportunities that might otherwise arise.”