Consensual but not mutually desirable: the harms of unwanted sex

The harms of consensual, but unwanted, sex is an under-explored issue, according to the Frederick Haas Professor of Law and Philosophy at Georgetown University Law Center Professor Robin West. 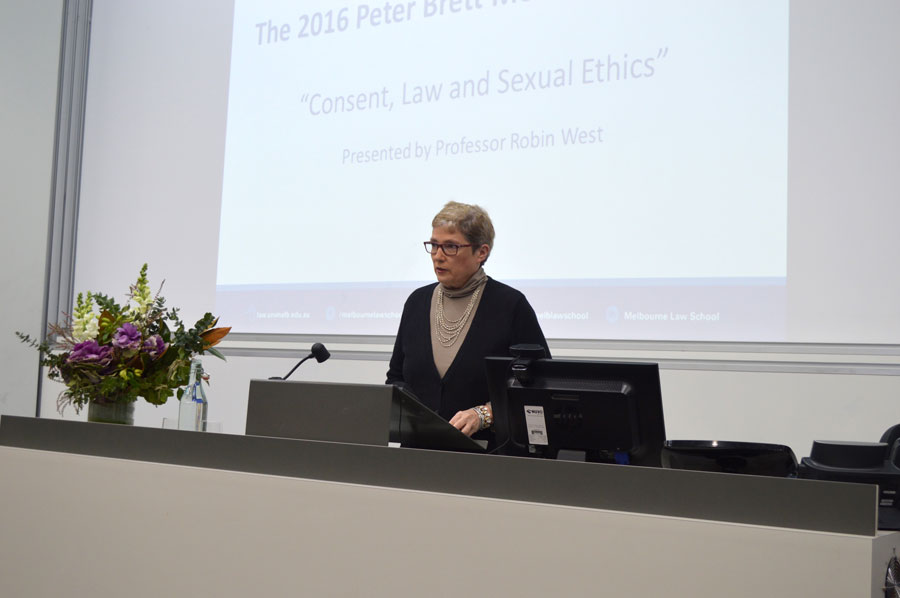 Speaking at the 2016 Peter Brett Memorial Public Lecture at Melbourne Law School last week, Professor West argued that because rape is generally defined as “non-consensual sex” accompanied by force, public discourse doesn't adequately scrutinise sex when it occurs without force, leading to limited dialogue of other forms of sexual harms.

Turning her attention first to non-consensual sex, Professor West said that rape is not only a criminal act, but also a political one. In threatening a woman’s physical security, non-consensual sex can also undermine her civic and political equality. For example, when rape or sexual assault is prevalent on a college campus she said that “non-consensual sex is also an educational wrong: particularly when unaddressed, it violates a woman’s civil right to equality and equal educational opportunity, which, in the US, are guaranteed by Title IX of our Civil Rights Acts.”

But while the alarming culture of sexual assault in US colleges has prompted a welcome debate about women’s rights, and how to prevent sexual violence, Professor West said that unwanted consensual sex has increasingly become a transactional norm.

Professor West said that most women and girls (and less often men and boys) who have been heterosexually active for any part of their lives have consented to sex they do not want or welcome.

She listed many reasons why consensual, but unwanted, sex can take place: peer pressure, cultural or religious obligations, to please a boyfriend or to retain a high status boyfriend’s affection. A woman who is economically dependent on her partner may also engage in sex to ensure she has a roof over her head, or over her children’s heads, or to stall the threat of violence should she not consent. If a woman is in a threatening environment, she may consent to sex as the lesser of two evils for fear of imminent violence.

“In all of these scenarios, the woman has consented to sex that she does not physically desire, does not emotionally welcome, and does not find pleasurable,” she said.

The suffering caused by engagement in unwanted sex are not just psychological or emotional, but intrinsically political. The alienation that results in unwanted sex serves to weaken one’s sense of equality and the effects of this are widespread and long lasting.

Professor West concluded that for sex to be morally justified, it must be mutually desired by both partners. And consent alone is not enough to render sex mutually desirable.

“In our sexual ethics, the test of good sex is how it feels, not whether you consented to it or what you got for it,” she said.