Melbourne Law Masters student Phoebe Blank is successfully juggling her study with full time work and her new role as President of the Law Institute of Victoria Young Lawyers (YL). 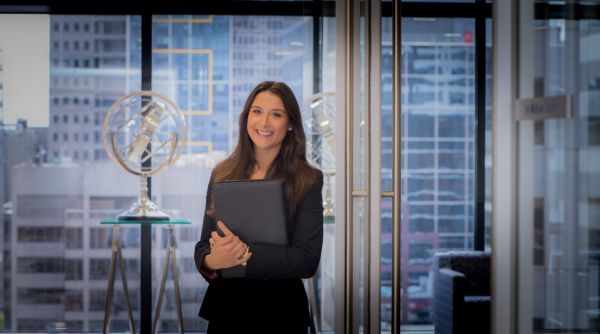 “We are a dynamic group established to enhance the legal skills, knowledge and professional networks of members in the early stages of career development,” Phoebe says.

“I am so grateful to be in this role because I love meeting new people and helping people in their career.”

Reflecting on her own career journey so far, Phoebe says she would not have been able to have the success she has had without ongoing learning opportunities.

“Young lawyers face a range of issues when first starting out. I am fortunate to have always had great mentors and teachers during my early years who assisted me to become a well-rounded lawyer.”

Phoebe is an Associate at TressCox Lawyers, where she works on a broad range of employment law matters.

She saw undertaking a Masters of Laws (LLM) as an opportunity to continue her vocational education, and to stand out from the pack, professionally speaking.

“I decided to undertake further study because I wanted to ensure that I would have the foundation to eventually become a market leader in workplace relations,” she says.

Phoebe believes there is a real need for lawyers to undertake further study in their chosen field because of the speed with which the law can change, particularly, workplace relations.

Studying for her LLM has provided Phoebe with an opportunity to hear and learn from leaders in her field, with one highlight being a lecture from Commissioner Peter Hampton of the Fair Work Commission during an Occupational Health and Safety class led by a leading barrister in this field, Mr Peter Rozen.

“Commissioner Hampton was a member on the Road Safety Remuneration Tribunal which was famously abolished virtually overnight due to political reasons,” she says.

“It was amazing to hear from Commissioner Hampton and to get his insight into the issues surrounding the Tribunal and general workplace health and safety.”

Phoebe says one the most important reasons for a young lawyer to pursue further education is the ability to network with their classmates. This is an opportunity that young lawyers often miss out on, or do not have the skills to take advantage of.

“The great thing about a Masters is that it attracts like-minded individuals who want to know more about a specific area of law,” she says.

“I have found that my MLS studies have provided me with contacts and networks in the industry.”

Whether it is further education, mentoring or another form of assistance, Phoebe says the most important thing is for young lawyers to reach out for the support which exists for them – an outlook she is hoping to share through her role at YL.

“This year, our focus is on mentoring, professional development, mental health and encouraging a young lawyer's community,” Phoebe says.

“We have amazing continuing professional development programs and we regularly have social events which range from casual drinks on a weekday to more formal events like the Charity Ball at the end of the year.

“YL programs are an incredible opportunity for young lawyers, students and graduates to get invaluable assistance. The biggest message that I can promote is that you are not alone. Someone will always help you, just reach out”