From medieval Slavonic languages to a career in foreign affairs

MLS alumna Janaline Oh (MPub&IntlLaw 2006) has just returned to Australia after having spent more than three years in Hong Kong where she worked as the Australian Deputy Consul-General and then Acting Consul-General. Her twenty year career in foreign affairs and diplomacy has seen Oh work all over the world, with different postings in Papua New Guinea, Brussels, and Beijing. 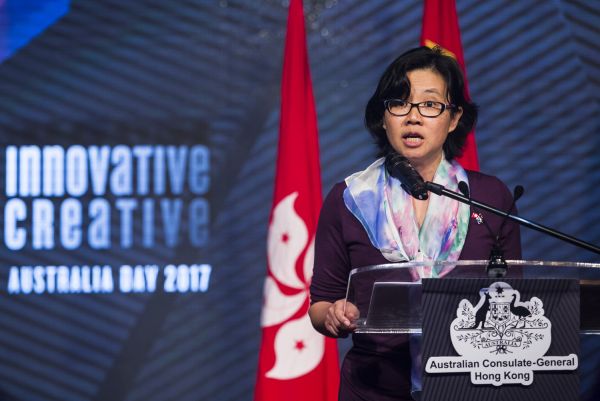 Having worked as a practitioner and negotiator in international law for many years, Oh has been at the coalface of global diplomacy and world-changing international agreements.

“I have had amazing opportunities to get to know life in Papua New Guinean villages, to understand real development processes and their impact on the lives of real people, to be part of negotiating the rules of implementation of international agreements on climate change, to engage in discussions about the laws of war in an actual conflict situation, and to live and work in Hong Kong at a critical juncture in its history,” she says.

Early in her career Oh learned that diplomacy is not always smooth sailing and that it requires a great deal of work and patience.

“One of the biggest challenges for a young diplomat is the realisation that you can’t just change the world; that things are complicated and require years – often decades – of hard work,” she says.

“Another big personal challenge for me is going to official functions and working a room full of strangers when I would rather be in bed with a cup of tea and a book!”

But Oh’s path to foreign affairs was not what she had initially planned. Upon graduating from high school in Melbourne, she went to the University of Cambridge to study mathematics as one of the nine female students in a cohort of around 200 students.

“I discovered in my first week that, contrary to my earlier self-assessments, I wasn’t actually very good at mathematics,” Oh says.

“I had studied Russian at school and loved it, so thought ‘why not?’,” she says.

“Cambridge was very accommodating: my college tutor was a linguist who confessed he never understood why anyone would study maths.”

Diplomacy was a logical step from studying languages and a career track through the Australian Department of Foreign Affairs and Trade took Oh all over the world.

It was after many years working in foreign affairs that Oh made a mid-career move to study a Masters of Public and International Law at Melbourne Law School, something she believes helped her to build a stronger knowledge base to engage with issues she has since come across in her career.

“It was really good for me to get exposure to the theoretical frameworks around many of the issues I had direct experience of working in,” she says.

“In my classes we had a fantastic mix of experienced practitioners working in a wide range of different fields, as well as new graduates, which made for great class discussions.”

As she returns to Canberra for a new post, Oh has some honest advice for anyone considering a career in international law and diplomacy.

“If you are interested in money or advancement, then it may not deliver what you are seeking,” she says.

“But if you have a passion for international engagement and want an opportunity to make a difference in that particular way, this can be a fantastic option.”

Read more about MLS Alumni working in foreign affairs in our next edition of MLS News, hitting mail boxes in early May.